Travelogue
Forest
An adventurer with lens 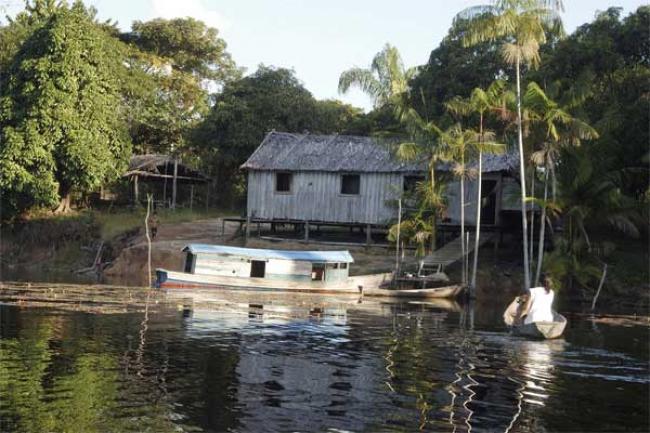 On a morning walk along the mouth of Amazon river, photographer D K Bhaskar saw a beautiful Caboclo (mixed Brazilian Indian and European or African ancestry) girl peering mysteriously from the water like a perplexed mermaid. He captured the rustic girl immersed almost nose deep in the shallow water, her innocent eyes filled with some undefined wonderment that borders on harmless suspicion.

The unkempt, uncombed golden-black locks appear grungy even after they are soaked. The frame of the girl against the backdrop of the river and sedimented river bed is as mystical as the Brazilian Amazonia itself, a region Bhaskar had set out to capture.

The unknown girl, like Wordsworth’s Solitary Reaper, leaves an imprint on the works of Bhaskar’s seminal documentation of the Brazilian Amazonia that has come out in the form of a thinking man’s coffee table book- “The Fragile Forest: Inside Brazilian Amazonia” published by International Fine Art Gallery of USA and now available in many Indian bookstores.

For Bhaskar perhaps the moment evoked a sense of déjà vu. The Amazon perhaps reminded him of the riverbank 18 miles from Mysore in Karnataka where he was born.

‘The Fragile Forest: Inside Brazilian Amazonia’ is a celebration of the spirit of the Amazonian rainforests, as captured through the lens of Bhaskar.

The book aims to introduce the reader to the mystery and romance of the region, supported by scores of photographs.

“While every attempt has been made to bring out fascinating facts about the Amazon basin and its significance as the greatest biodiversity hotspot on this planet, this book is not intended to be a detailed historic, economic, scientific or geographical reference for the region,” says Bhaskar whose romance with the natural world began with sojourns to neighbouring agricultural fields of his house in Karnataka.

The book contains 160 colour illustrations and three maps depicting the fabulous landscape, people and wildlife of the Brazilian Amazonia.

The book is a collector’s delight and a treasure for anyone looking for a pictorial representation of encounters in the wilderness of the Amazonian rain forests, which is a   a wet broadleaf forest that covers most of the Amazon Basin of South America, spreading across 7 million square kms, including 5.5 million square kms covered by the rainforest.

This region comprises territories of nine nations, with sixty percent of the area falling under Brazil.

The Amazon rainforest was short-listed in 2008 as a candidate to one of the New 7 Wonders of Nature by the New Seven Wonders of the World Foundation.

“This is a poetic book with the photographs unveiling the beauty of the forest, a feast to eyes, as well as its mysteries that stirs strange apprehensions,” says Jose Vicente Pimentel of the Brazil embassy in New Delhi.

According to Bhaskar, equally intriguing like the forests are the people of Amazonia. “Their culture, their lives, diversities and co-existence with the wilderness make them a remarkable people to study,” says Bhaskar whose frames capture their spirit amply.

In one of the pictures, Bhaskar has a group of free-spirited Brazilians on a beach. The photo is not a typically glamourised South American sea beach of bevies and beefcakes.  It captures a group of real people with real smile, either catching fish or setting up a barbeque.

The photographer in one frame captures the hammocks, something which is customary for everyone to rig up and curl up for the night in the region.

“I still have mine as a sourvenir,” says Bhaskar.

Bhaskar also imprisons the  Caboclos, who are descendents of European rubber harvesters brought in by merchants to collect natural rubber from the forest.

“Their children, commonly known as Ribeirinhos or river-dwellers, mostly live in the river-front dwellings along the Amazon and its tributaries and run the small commerce on the river,” informs Bhaskar.

“The Amazon is not just about the vast jungles, but also the teeming human life on either side of the river,” says Bhaskar.

What makes Bhaskar’s book special is its simplicity while capturing the rawness of the natural beauty and the ethnic groups.

Bhaskar had always been an inquisitive and adventurous person with a penchant for playing the socially responsible ambassador of vanishing cultures and threatened landscapes and that comes out in the book.

“I celebrates the joy of discovering the world through my lens,” says Bhaskar who is a fellow of The Explorers Club founded in 1904.

Before his Amazonia project, Bhaskar has crisscrossed deserts  mountain passes and Arctic tundra during the course of his expeditions. His journeys have taken him to culturally diverse destinations the world over.

His horizons broadened as he travelled far and wide in search of visions that captivated him. At the age of 17, he received the prestigious President’s Scout Guide Medal (similar to the Boy Scouts of America’s Eagle Scout highest award) from the late President of India, Giani Zail Singh.

He also holds a Mechanical Engineering degree from Bangalore University.

Recently Bhaskar was in India’s Assam to teach photography to rural children as part of his altruist zeal.

“I live in a virtual world and my motivation is to capture and share extraordinary images with people”, says Bhaskar, in the midst of his numerous travels capturing the cultures, persona and the natural world.