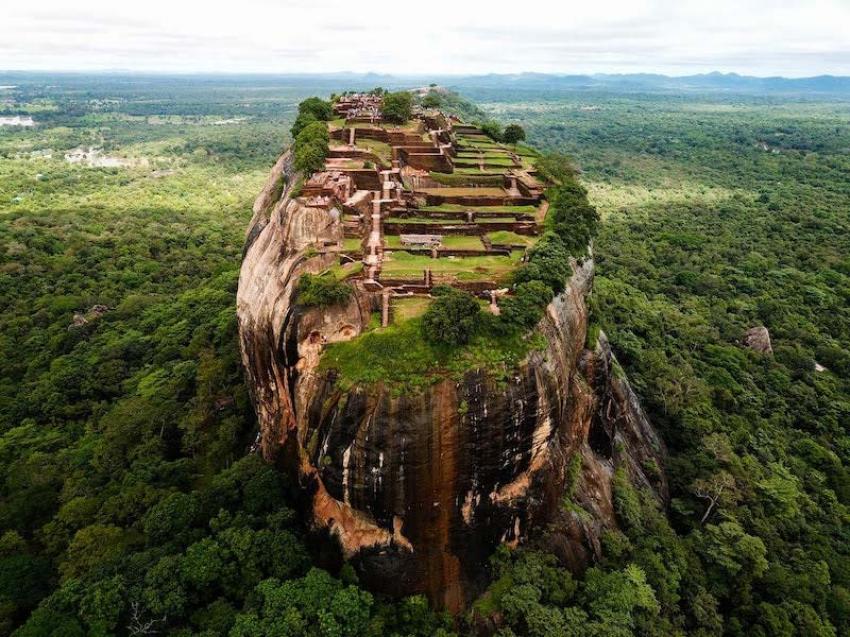 A mesmerising Indian Ocean sunset in Galle, snorkelling in the watersport coastal getaway Bentota, trekking to the palace ruins of  Sigiriya rock or watching elephant herd shower in Pinnawala, Sri Lanka packs a world of experiences. For Indians locked up in homes, survival is all about vaccines. But after an air bubble tour of this island nation amid the pandemic, Sujoy Dhar is convinced that the road to rejuvenation is a Sri Lankan Airline flight to Colombo.

They say every sunset brings the promise of a new dawn. But this was one sunset over the Indian Ocean in Galle in Sri Lanka amid the ongoing pandemic that one would want to remain frozen in time.

The overlapping layers of crimson red, blue, grey and yellow had turned the sky over the ocean into a canvass which only god can paint. A few wind-swept coconut trees silhouetted against the setting sun only added to the magic of the evening. 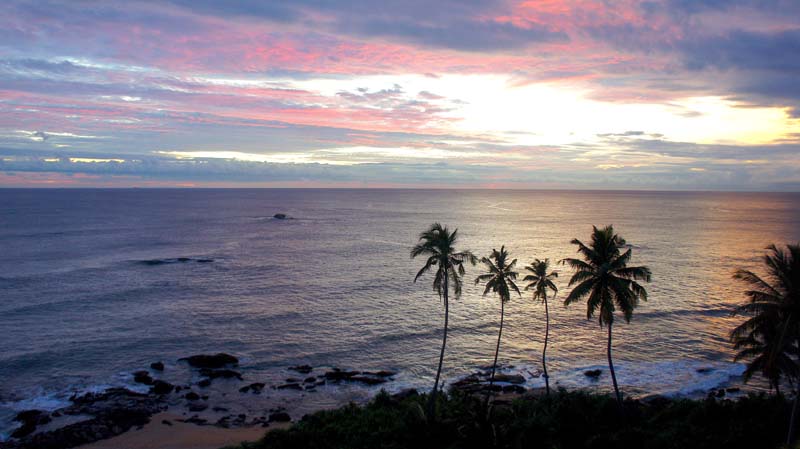 From a top floor deck of the beachfront resort of Amari Galle Sri Lanka, this March end evening was one that would forever be etched in memory.

A post-pandemic or rather a post-vaccination trip to Sri Lanka after landing in the capital city of Colombo, can begin with Nuware Eliya district, known for its colonial charm, rolling hills and famous Ceylon tea gardens. Before you  travel to Kandy, Sigiriya (Dambulla) and then to the seaside town of Galle, head for Nuware Eliya. 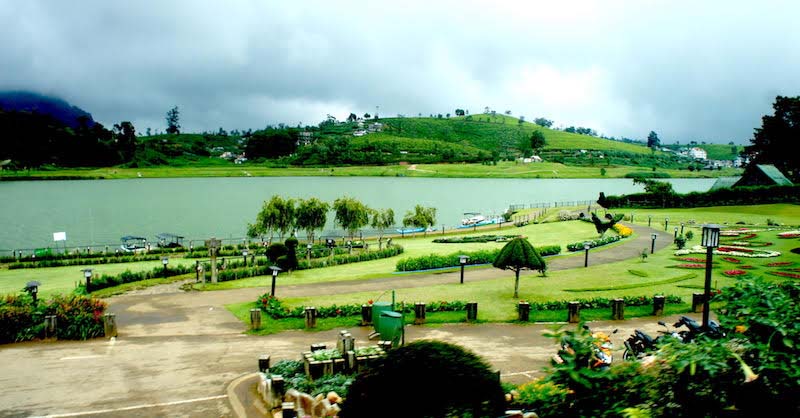 This famous upcountry town of Nuwara Eliya, known for its subtropical highland climate, is at 1868 meters (6128 feet) above sea level in the Nuwara Eliya District.

While the lovely tea plantations are a big draw of Nuwara Eliya, the town also offers a breath-taking view of Gregory Lake.

This is a man-made lake constructed by the British in 1873 and named after Sir William Gregory. The beautiful waterbody against the backdrop of lush green hills is your perfect getaway for a walk or riding a bike or boating besides other water  sports it offers. 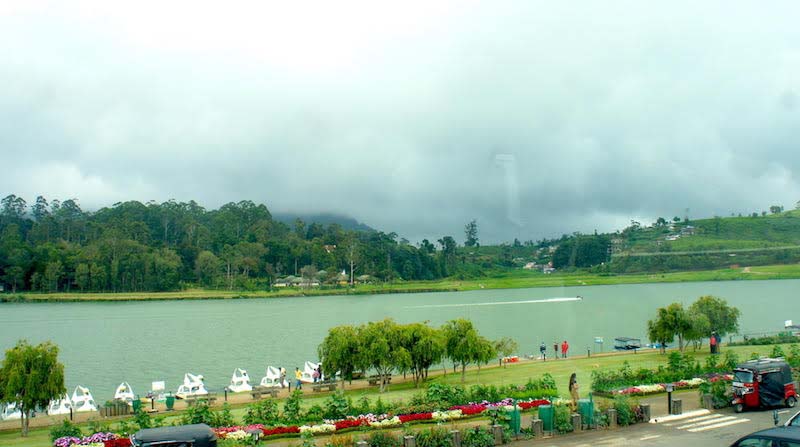 After a year of lockdown and no travel, on a spring rain-washed afternoon, as a glistening Gregory Lake unfolded before my eyes from the bus window, it felt like one was transported to a picture postcard.

A walk tour of Sri Lanka's "Little England" is highly recommended to savour its lush green hills, tea plantations and the British era buildings with colonial and Tudor architecture.

Since Nuwara Eliya is famous for its colonial-era bungalows and Tudor-style hotels, you are advised to stay in one. We stayed at Jetwing St. Andrew’s, which is six acres of highland luxury and heritage.

Winding through the misty rolling hills of lush tea plantations, when you head for Kandy, a UNESCO Heritage site known for the Temple of the Tooth Relic (a sacred tooth of the Buddha), take a stopover in one of the food joints by the hillside.

They offer magnificent views of the mountains and the forested valleys and lakes. 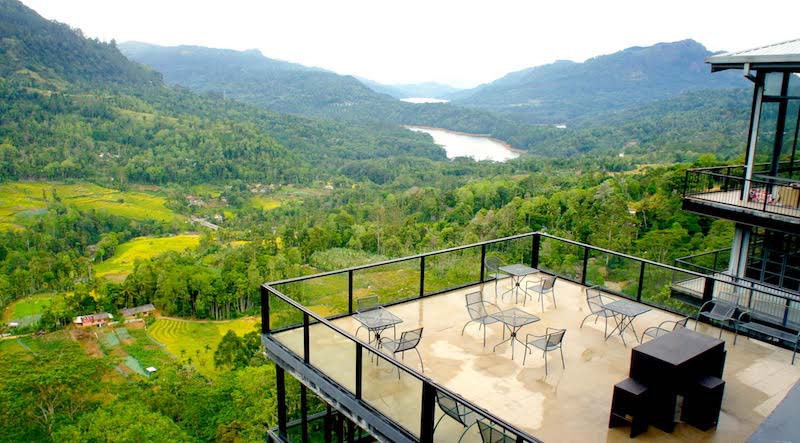 After some three hours you reach Kandy and as you are ushered into the second largest city of Sri Lanka surrounded by hills, you are bowled over by its centrepiece attraction- the lake.

Known for its history and culture and its beautiful colonial buildings and Kandyan architecture, Kandy is one of the most sacred places of Buddhism. 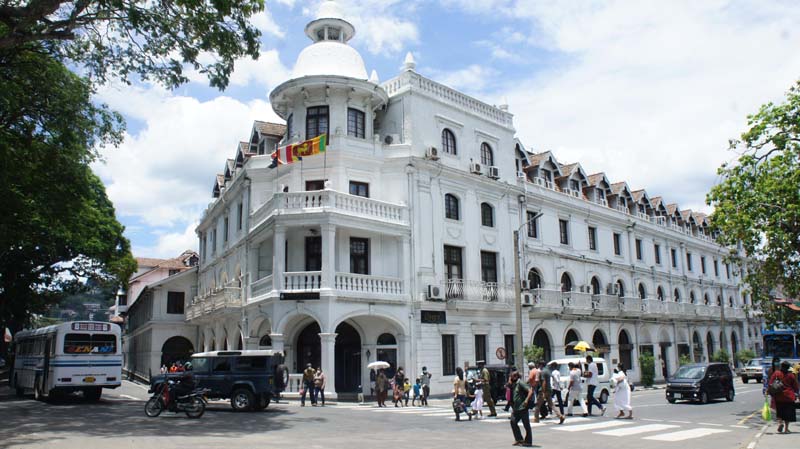 While air-bubble restrictions stopped us from exploring the city like in normal times, a visit to the sacred Temple of the Tooth was but obvious. Since Kandy is home to Buddhism’s most sacred relics, it draws Buddhists across the world. 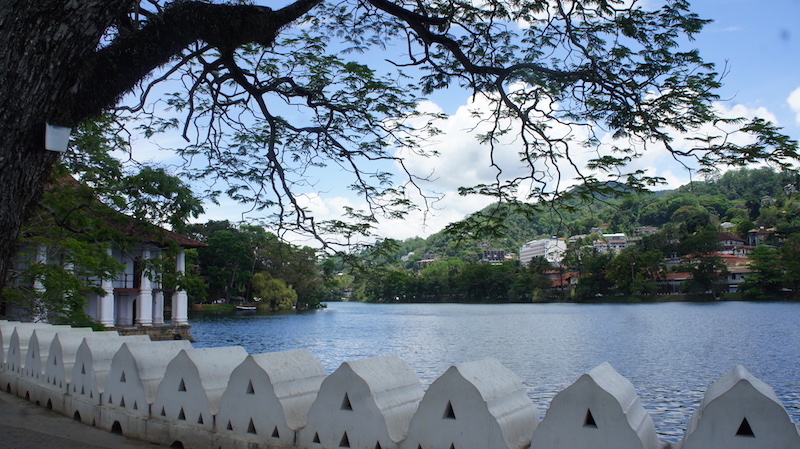 The Royal Complex situated around the Temple of the Tooth and Kandy Lake – comprising the King’s Palace, the Queens Palace, the Audience Hall, the Royal Boathouse and the Royal Summer House- represent the zenith of ancient Sri Lankan architecture. 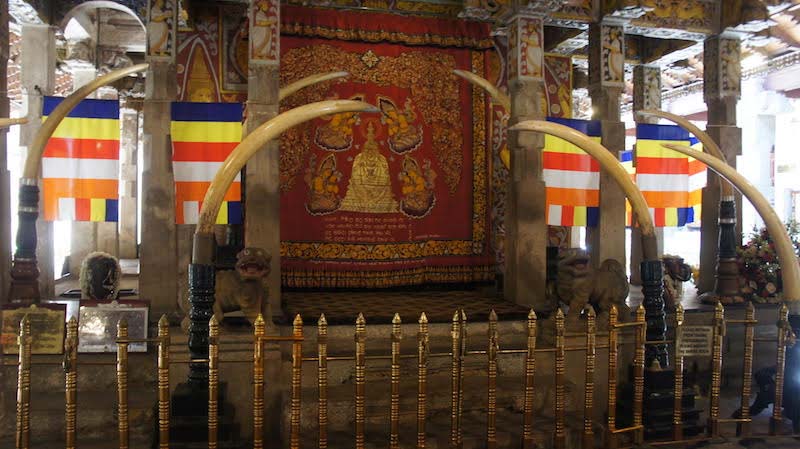 The Temple of the Sacred Tooth enshrines Sri Lanka’s most important relic of Lord Buddha. Constructed during the 17th and 18th centuries, this temple is surrounded by a deep moat.

Kandy has many religio-cultural attractions. But if you want to enjoy the city and also the seclusion of an eco-friendly refuge, you can choose a property in some little remote corner of Kandy.

We stayed at Jetwing Kandy Gallery located a few kilometres away amid mountains and overlooking the Mahaweli River – the longest in Sri Lanka. 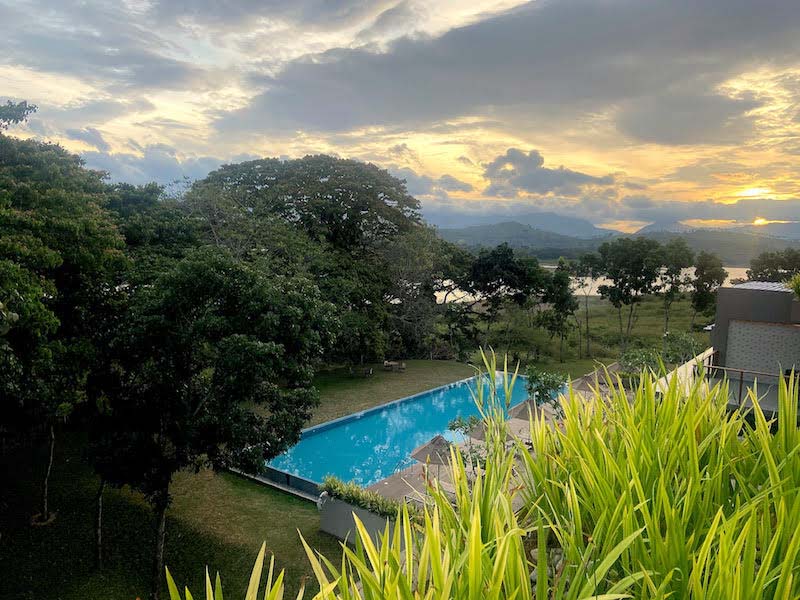 While being close to the tourist hotspots, you can enjoy the flavour of a village life in a property like this. Well, the high point of my stay was waking up to the view of a grand portal of hills, river and forest against a magnificent sunrise. 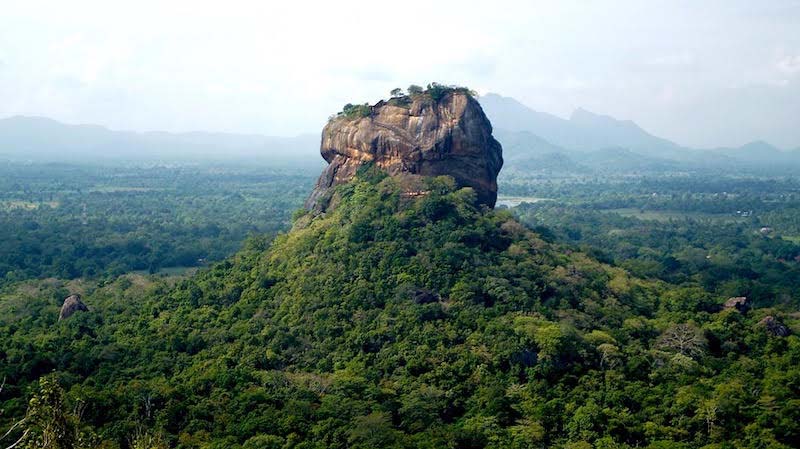 From Kandy, head for Dambulla, which is famous for its rock cave temple complex.

But instead of  staying in the town, check in into a hotel like Jetwing Lake, a secluded property in a natural surrounding that combine expanses of greenery, water body, forests, chirping of birds and hills looking yonder down. 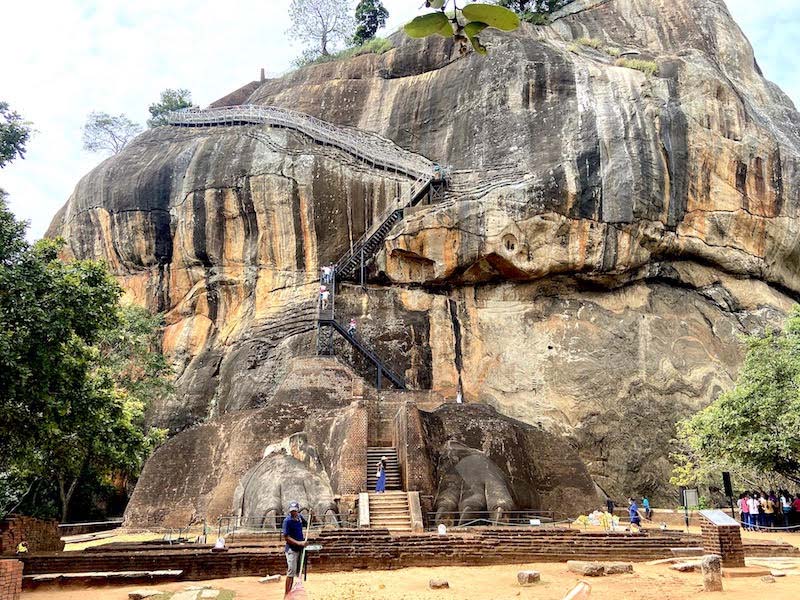 But in the morning get ready for an uphill task- well we mean the challenge of Sigiriya, the dramatic rocky outcrop that is a world heritage site since 1982. From Dambulla the distance is about 25 km.

Sigiriya is famous for its palace ruins (King Kashyapa, 477 – 495 AD when he built his new capital) on top of a massive 200 meter high rock surrounded by the remains of an extensive network of gardens, reservoirs and other structures. 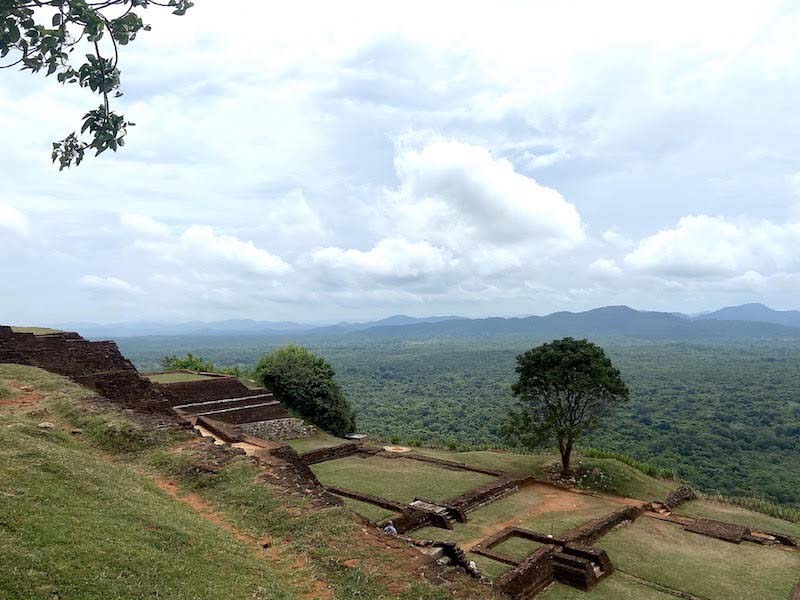 It is a Fortress in the Sky. On the summit are the remains of the Royal Palace. Halfway during the trek, you find a small plateau where the King had built a gateway in the form of an enormous lion. The name of this place is derived from this structure — SÄ«nhÄgiri, the Lion Rock.

This rock  is a lava plug left over from an ancient long extinct volcano. It also boasts of ancient paintings (frescoes), similar to India’s Ajanta Caves. 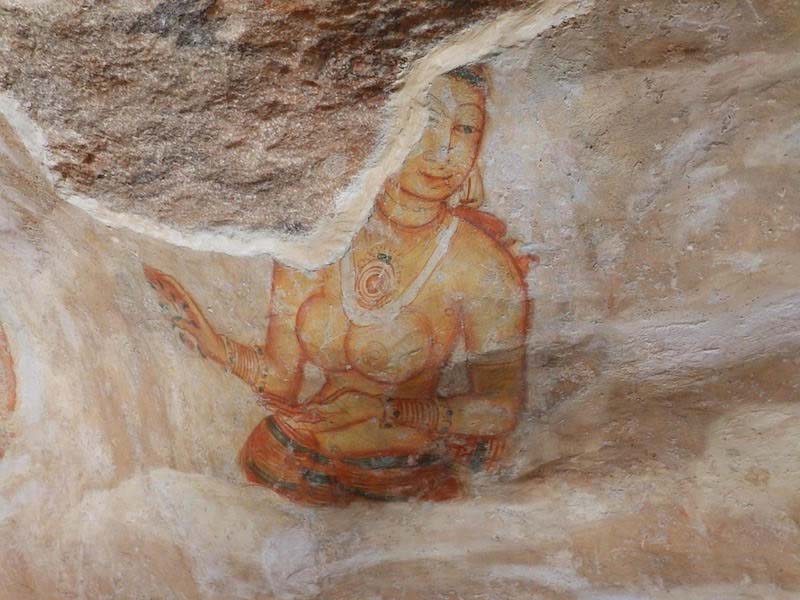 Climbing the stairway along the vertical walls of the rock is an uphill task indeed. As you reach the flat-topped summit of an ancient civilization, what you see is a sweeping vista of emerald forests and faraway mountains. 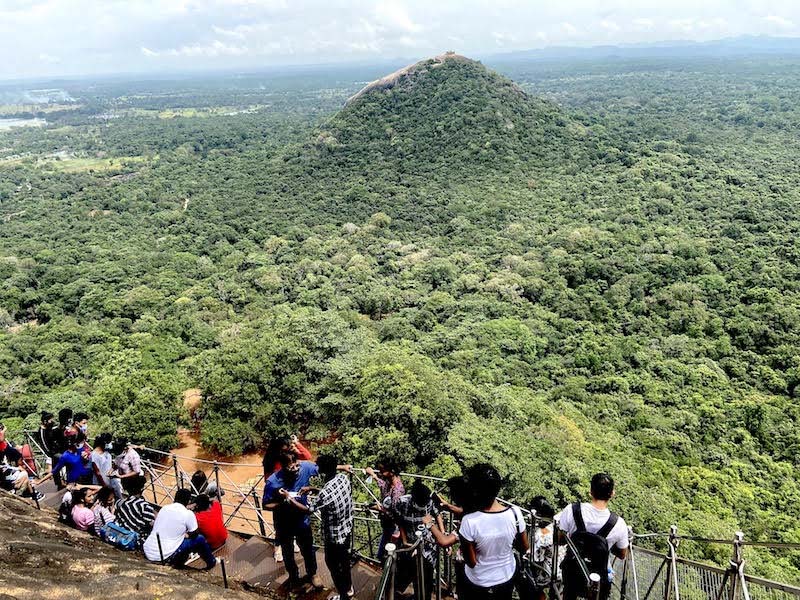 According to Sri Lankan tourism, Sigiriya was used as a rock-shelter mountain monastery from about the 5th century BC, with caves prepared and donated by devotees of the Buddhist Sangha.

From Sigiriya on the way to the coastal resort town Bentota, there is Sri Lanka’s "been there seen that" stopover for visitors.

To be in Sri Lanka and not watch the herd of elephants taking a shower is not cool.  So stop over at the  Pinnawala Elephant Orphanage on Colombo – Kandy main road. 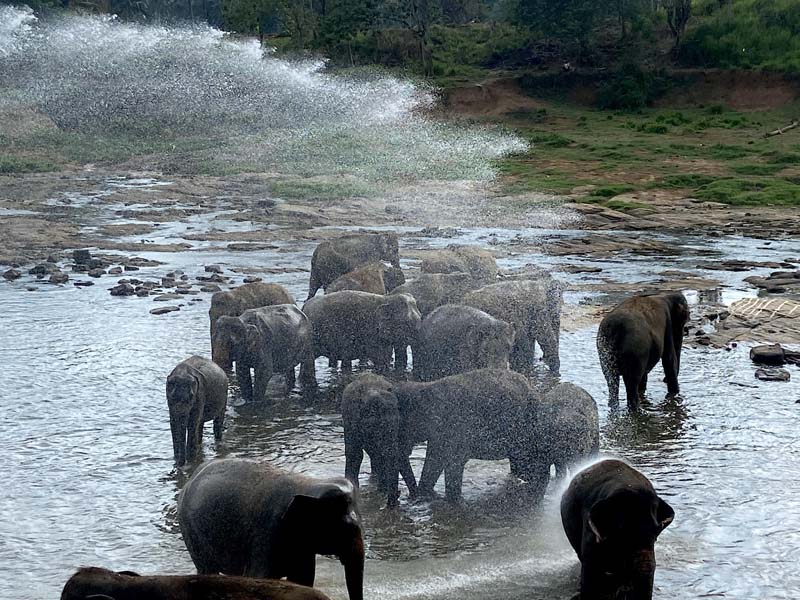 The elephant bathing and viewing area along a river is directly opposite on the west side of the highway. The orphanage was set up to tend for abandoned or orphaned elephants, but it soon became a tourist attraction.

It is not like something you can watch in the wild forest and for some it can look a bit staged for the tourists. 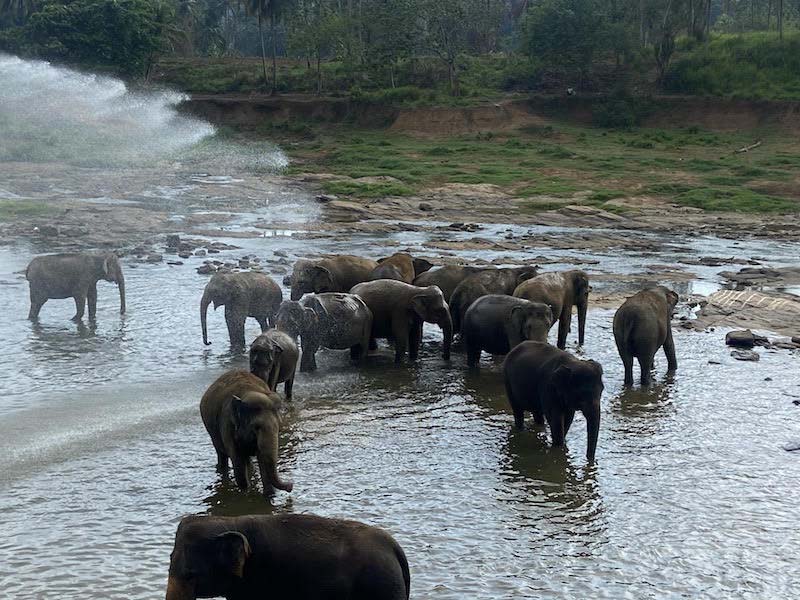 But to watch the Mahouts leading the elephants to Ma Oya river for bathing at certain hours of the day nevertheless offers you an opportunity to see a larger number of elephants together in a somewhat natural setting.

It was a rainy night when our bus pulled up in front of the reception desk of a hotel. Well, this was Centara Ceysands Resort & Spa and what we realised soon is that from the reception lobby the hotel room has to be accessed by a ferry.

Amid rain and some darkness, a short boat ride across the lagoon took us to the main building- so in Bentota your hotel room from the hotel reception can be one exciting boat ride. 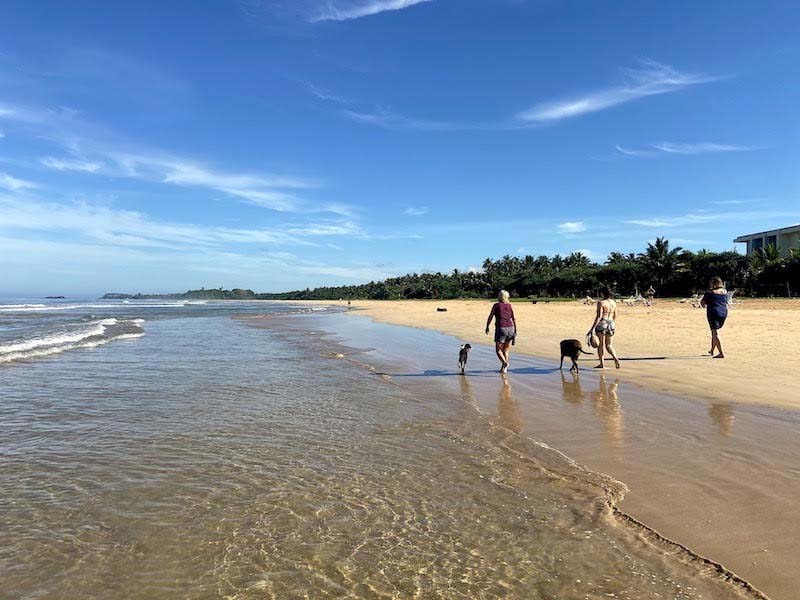 It was in the morning that I realised that we are in a hotel that is flanked by the Bentota River on one side and the Indian Ocean on the other. Yes, you can stay in such properties here where waking up you either walk into the beautiful beach or choose some water sport in the river. 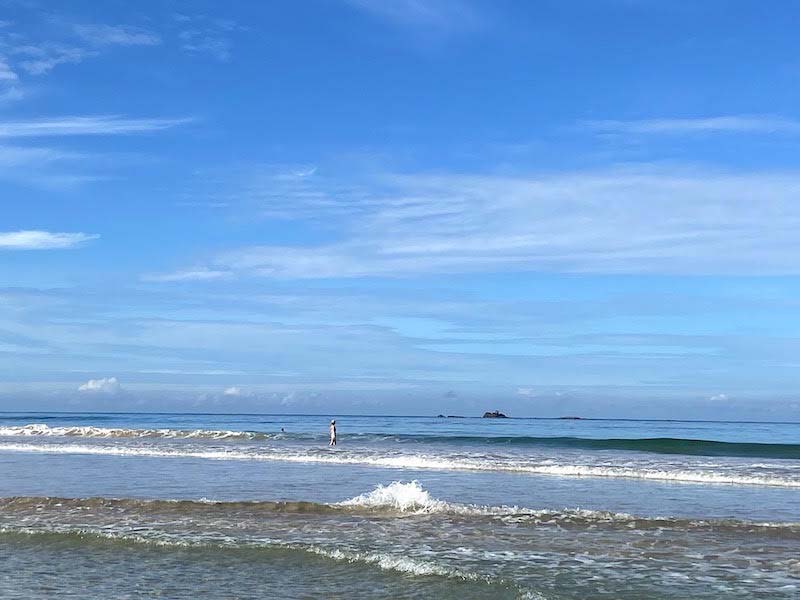 Bentota beach was on my bucket list from several drone images I saw and so it felt like heaven to be in a lagoon set in the tropical greenery.

Located in the Galle District of the Southern Province, Bentota is  on the southern bank of the Bentota River mouth with a ribbon of golden sands forming the seafront.

The name of the town is derived from mythology where a demon named 'Bem' ruled the tota (river bank).

River Bentara Ganga is dotted with islets rich in birdlife. Bentota is also a spot of luxury resorts with spa facilities.

There are budget accommodations too on the bank of the river in Aluthgama with the same boat transfer through the inlets.

From swimming and water skiing on the rivers or estuaries to snorkelling, scuba diving, wind surfing, parasailing or fishing, Bentota packs everything.

So once you have enough of Bentota, take the scenic coastal ride to Galle.  This drive by the Indian Ocean will be one of your memorable Sri Lanka experiences.

Once you are in Galle you know you are just 116 km away from Colombo. 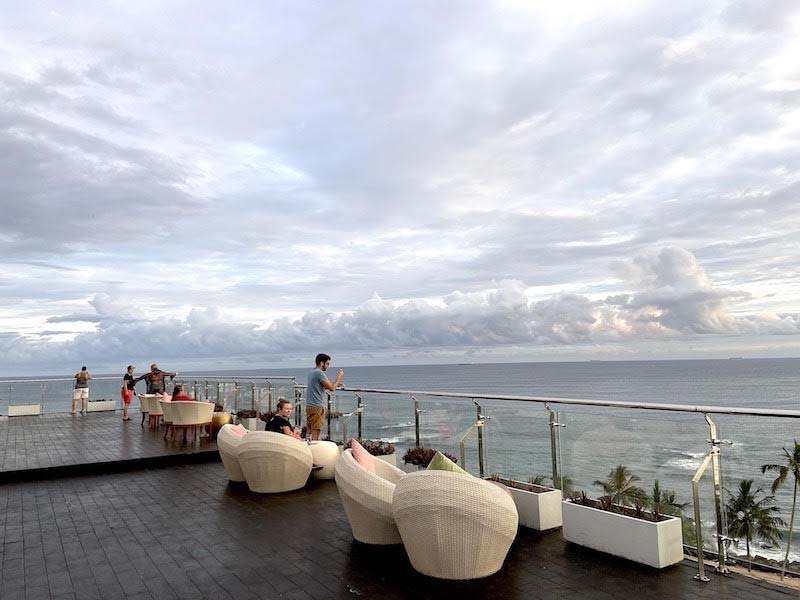 Galle on the southwest coast of Sri Lanka is known for Galle Fort, the fortified old city founded by Portuguese in the 16th century.

Now teeming with cafes, restaurants, the architecture of Galle is an amalgam of the Portugese, Dutch and later the British.

Overlooking the Galle Fort is one of the world's most picturesque stadiums as it is fringed on two sides by the Indian Ocean.

Galle to cricket lovers across the world is famous for this stadium of Galle Cricket Club, considered a lucky venue for the Sri Lankan team. 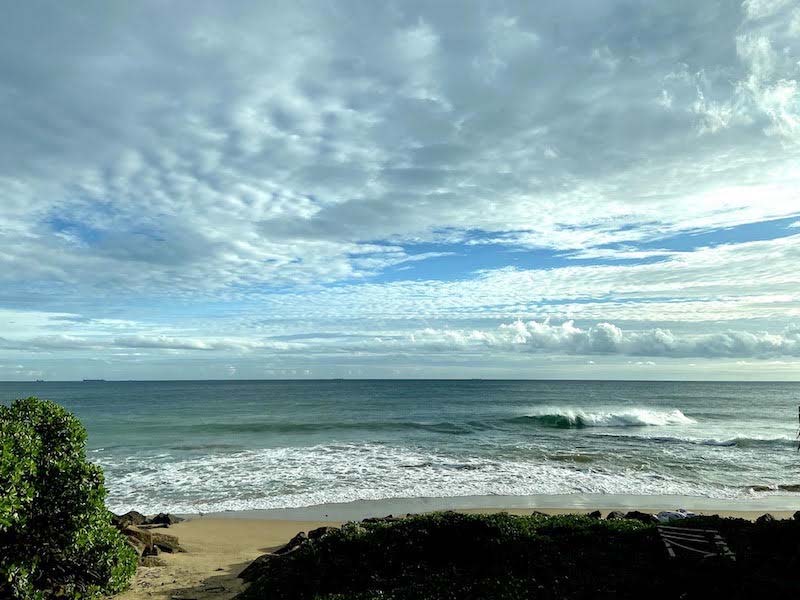 In Galle you can stroll down the cobblestone streets of the old city while the Galle Fort remains the slow beating heart of history since 16th century.

The Portuguese conquered Galle from the Sinhala kings in 1587 and erected the first fortification, a single wall fronted by a moat extending from the sea to the harbour. Then came the Dutch in 1640. They defeated the Portuguese after a four-day siege. 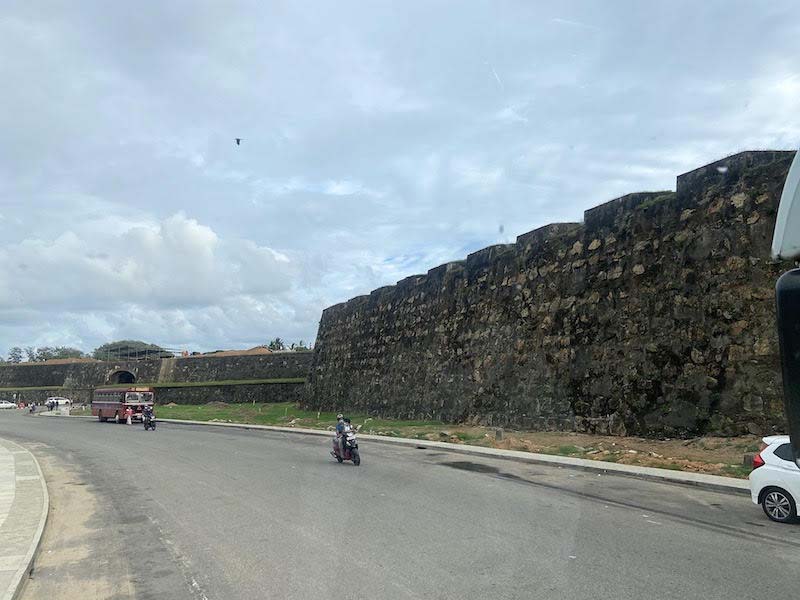 Time passed but Galle retained the flavour of its past, marked by old houses with ornamental doors and windows, pillared verandahs and cool inner courtyards and gardens. 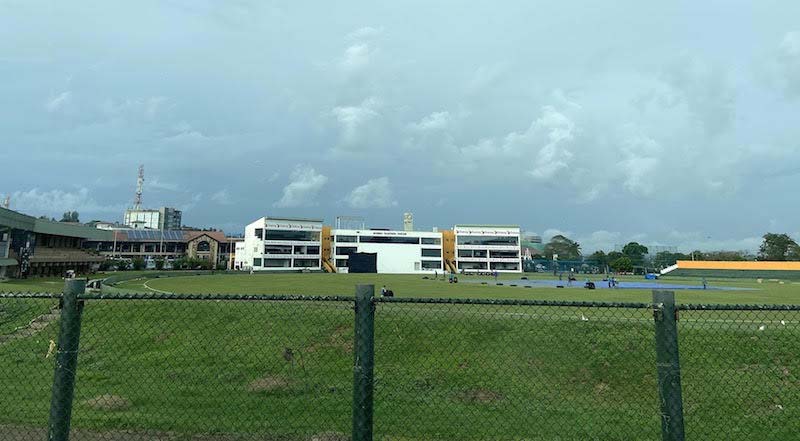 But as we begin, the best experience of Galle can be just to check in into one of the many beautiful properties and watch the sun setting over the Indian Ocean creating a palette of colours. 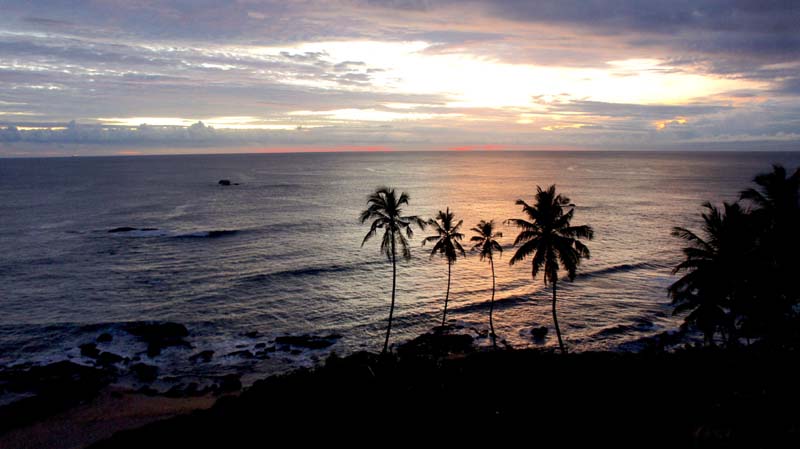 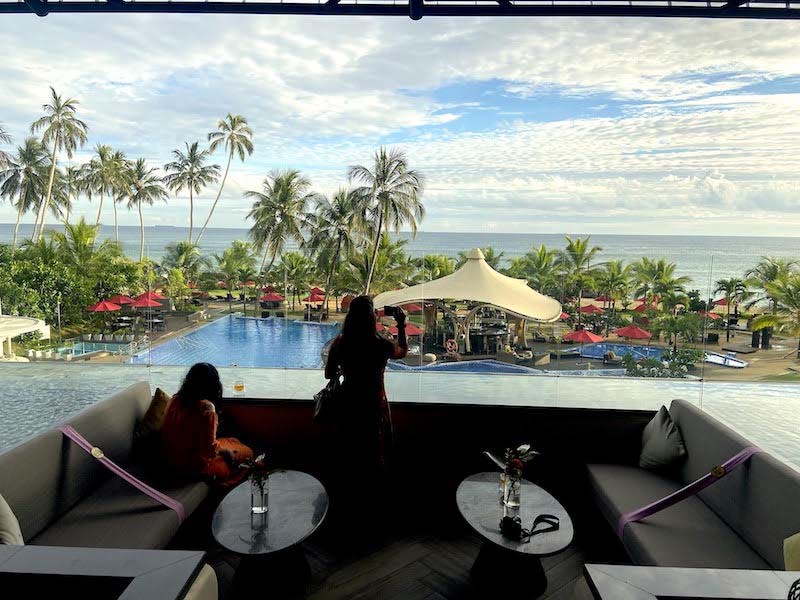 In Image: Views from Amari Galle

Before you head for Colombo for your India flight after a two-day stay in Galle, you actually go back with the treasured memory of a sunset.

How To Reach: Sri Lankan Airlines flight to Colombo from Indian cities. From Colombo all the destinations mentioned can be covered by road.

Where to Stay: Properties under Jetwing Hotels most advisable if your budget is good. In Galle, it should be Amari Galle, Sri Lanka. In Colombo one of the good star properties to stay is Movenpick Hotel Colombo.