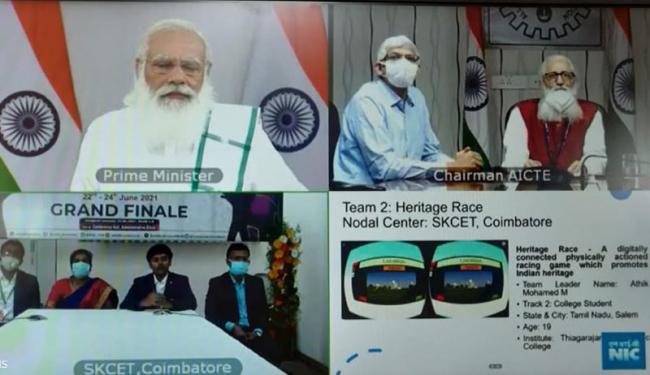 Salem: Parks, gardens and monuments, like everything else, wore a deserted look during the Covid-19 lockdown.

With every Indian, young and old, confined indoors all physical activity had to take place inside one’s homes. Most were glued to a mobile, computer or a television screen.

At this time, 19-year-old civil engineering student Athik Mohamed M truly missed the trip to college and his regular visit to the gym in Salem, the textiles and steel town in South India where he lived.

While classes at Thiagarajar Polytechnic College, moved online Athik found himself starved of activity and decided to address this by getting on to his cycle right inside the house as it was mounted on a stand. In effect, he began to use it as an exer-cycle.

The only problem was that he found himself staring at a blank wall. That’s when he got to work creating ‘Heritage Race’ as part of the All India Council for Technical Education (AICTE) ‘Toycathon’ programme encouraging the development of innovative toys and games, the more Indian, the better.

Athik decided to add a layer of virtual reality to the exercise cycle so that the rider could ‘go’ somewhere while cycling away. What is needed is a VR headset, a phone, and the app. Headsets are now quite inexpensive and easily available.

The Heritage Race game then allows users to view historic monuments in a virtual environment while cycling indoors. What makes it interesting is that users on a regular bicycle can follow heritage routes and even listen to soothing Vedic music in the background. The user of course gets a 360-degree view, as is always the case in VR.

This student then presented his digitally connected racer that promotes Indian culture and heritage while being physically active at the grand finale of the Toycathon to Prime Minister Narendra Modi in a virtual session in end June 2021.

“Felt really nice and honoured,” says Athik Mohamed M, a final year diploma in civil engineering student topper (96.3 pc score till Semester V) from Thiagarajar Polytechnic College, Salem at the opportunity to interact with the Prime Minister. “I shall work on the ideas suggested by the PM to enhance the scope of this game.”

Prime Minister Modi appreciated the new game idea and suggested that the team devise a similar mechanism for a treadmill user. Athik assured the PM to work on his suggestions along with team members Deepesh M and Anung Yangfo K, his classmates and buddies since he joined the 64-year-old Thiagarajar Polytechnic college in 2018.

While creating a Virtual Reality (VR) experience with visualisation of Indian monuments and ancient cities Athik and his team mates improved the by combining an element of exercise and mental fitness by adding soothing Vedic music in the background. And that turned out to be a major reason for bringing the game to the attention of the Prime Minister, Junior Education Minister and officials of the Education Ministry and the AICTE. It was one of the top seven to be reviewed.

“We worked as a team and the college also supported us in developing this idea”, said Athik. “While the entire idea was ours, the toy development involved taking help from several departments of Thiagarajar Polytechnic like 3-D modelling and sensor setup. We were also supported by alumni mentors.”

Expressing his satisfaction at the Heritage Race team from Thiagarajar Polytechnic College making it to the final seven entries out of 1567 shortlisted ideas, Dr. V. Karthikeyan, Principal said, “We encouraged the participating team to continue innovating to overcome technical challenges.

Of the nearly 17,000 ideas submitted for Toycathon 2021, 1567 ideas were shortlisted for the 3-day online Toycathon grand finale, and only 7 outstanding ideas were picked to present to the Prime Minister.

Toycathon 2021 was organised by the Ministry of Education and AICTE in coordination with Ministries of Women & Child Development; Information & Broadcasting; Commerce & Industry; Micro, Small and Medium Enterprises and Textiles.

Athik thanked the principal Dr V Karthikeyan, head of civil engineering department Loganathan and mentor M Ponni for bringing out the best in the team.