News
India
India will become a permanent member of the UN in your lifetime: Ramu Damodaran to students 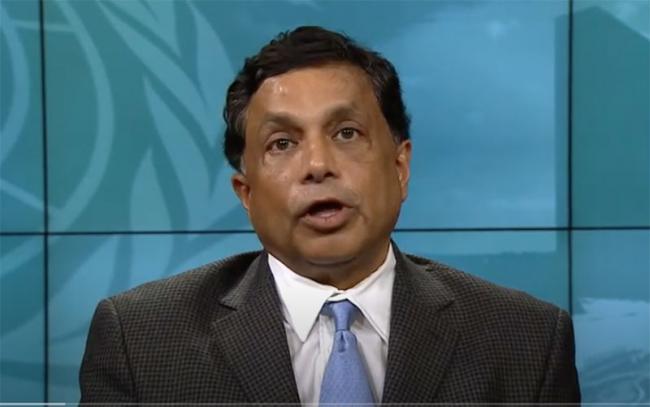 On the occasion of the 76th United Nations Day, Muskaan, a Prabha Khaitan Foundation (PKF) initiative, along with Education for All and Shree Cement, organised an online interaction between Ramu Damodaran, a former Secretary for the United Nations General Assembly on Information, and selected schools from all across India, to educate young minds about the history of the inter-governmental organisation. IBNS correspondent Nitin Waghela tracks the event.

What is the key similarity between India and the United Nations?

I have always believed that 'India is the United Nations made possible'. When we look at India's diversity it is evident because  from the Kathakali dance in Kerala to Rabindranath Tagore's genius in West Bengal to the fact that India has never been shy to take the best of other cultures, which in a sense is also the rationale of the U.N.

A hundred years ago Mahatma Gandhi started working alone for the independence of our nation, which did not come across as an act of excluding the society but marked the beginning of a journey. As the famous Indian poet Majrooh Sultan Puri once said, others began joining Gandhi and soon it became a caravan and that in many ways is what the United Nations is about.

What is unique about the 76th United Nations Day?

This particular U.N Day is unique in various aspects. Last year we were frankly hiding and compulsions were forced upon us, while aspects of life special to many like our childhood, youth and education got affected. This U.N Day we have marched a long way forward and recently we also reached a landmark milestone in vaccination even after extending our help to the less fortunate countries.

How has the core ideology behind the formation of the UN evolved?

Mother Teresa founded the movement called Missionaries of Charity. When the United Nations was established in 1945, the Ambassador of Greece described it as an act of charity. But now when we use the word charity, it implies the fortunate giving to the less fortunate which is not what it truly symbolises. Charity is really the belief that everyone has something to offer to the world.

The opening of this year's U.N General Assembly saw the President of Brazil, the President of the USA and a galaxy of international leaders present to share what they felt was most important to them and the U.N.

One of the ideas of the founding fathers was to create a more compact body open initially to 11 members which is known as the U.N Security Council.

Today, there's a growing movement for being a permanent member of the United Nations in many countries which displays how inclusive the U.N will become. I believe that India in your lifetime will become a permanent U.N Security Council member.

How is India utilising the U.N to promote the use of solar energy?

It is appropriate that the country which brought 'Surya Namaskar’ to the world should now lead the global initiative on solar energy by working with the United Nations.

After having started the International Solar Alliance (ISA), India is now going to ask the United Nations for observer status so that countries can pool in their intellectual and entrepreneurial abilities to harvest solar energy and also create bilateral platforms blending creative solutions with technical and financial mechanisms.

Could you share your experience managing the United Nations 'Academic Impact' programme?

The programme provided academic institutions and scholars with an opportunity to work together for the United Nations. On the other level, there were young minds who helped me realize that the sole purpose of the U.N’s work is to preserve the dignity of life.

During my tenure there, I came across a story written by Tom, a 14-year-old boy, which said that his grandmother did not mind the fact that she was nearly blind and unable to read, but she minded being unable to tell when her cup of tea got ready.

Her grandson later added an electronic chip to the cup which made it beep after crossing a certain level. This came from the brain of a teenager which will help many across the world. Tom is the United Nations, as even thinking locally one can bring about changes which can be later upscaled at a global level.