News
India
My mother felt it was criminal to not live up to our full potential: Shobha Tharoor Srinivasan 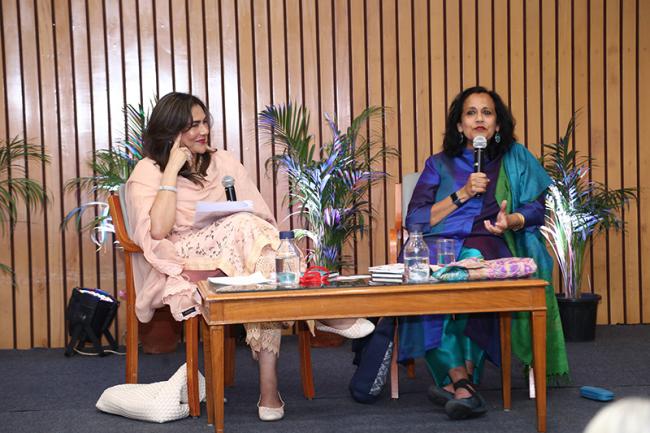 Why do you want to write a book about me? Why not one on your famous brother?” – was Lily Tharoor’s first reaction when she learnt of her daughter Shobha Tharoor Srinivasan’s intention to write about her life.

Cut to a searing hot May evening in 2022 and book lovers had gathered for the launch of ‘Good Innings – the extraordinary, ordinary life of Lily Tharoor’ published by Penguin India.

Politician, author, and former international civil servant, Shashi Tharoor, who is also the brother of the author, was the chief guest at the event - the Kitaab Books -organized by the Kolkata-based Prabha Khaitan Foundation and presented by Shree Cement.

“The book is not just about my mother, but one that is dedicated to all mothers,” said the author and voice-over artist at the glittering event held at Delhi’s India International Centre on a very special occasion – Mother’s Day.

Listening to Shobha was indeed a treat as she regaled the gathering with incidents from the time the family was based in Calcutta (now Kolkata) to the present time when she lives in the US. Her mother stays in Delhi with her son while often visiting her flat in Kochi too.
“Age is just a number for my mother who continues to be her feisty, fun-loving self while keeping all her children and grandchildren close to her heart.”  Purnima Sharma shares the excerpts from a tête-à-tête with the author. 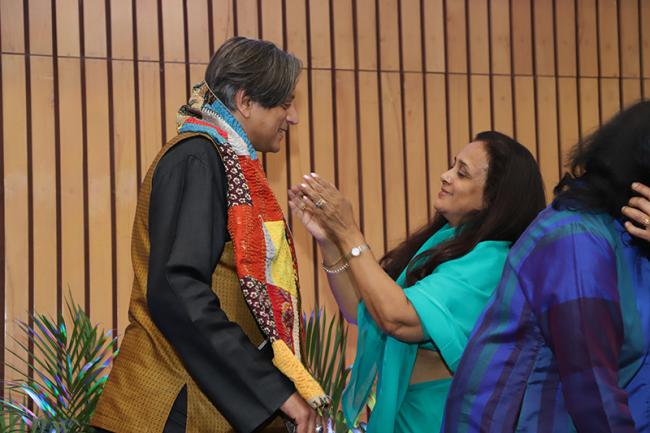 What prompted you to write a book on your mother, Lily Tharoor? What was her reaction when you told her that you were keen on writing a book on her life?

I was approached by a Penguin commissioning editor to write my mother’s memoir. That was the prompt. The editor believed that a biography of a strong matriarch and the mother of a national figure would galvanize young people into growth and action. I was reluctant to write a conventional biography or memoir but I felt that our isolation during Covid made the recollection of memories and the telling of stories even more important.  As I wrote in my author’s note in the book, “It is in hearing stories and in telling them that we recognize the familiar and feel connected.” So, I framed the book as part memoir and part self-help. Each chapter showcases teachable vignettes from my mother’s life. I use personal reflections, life lessons and philosophical insights.

My mother was less than enthusiastic when I began to write.  But now that she has read the book, I believe she is pleased.

Was recreating the early years of her life difficult? It must have been a great learning experience for you as well as you delved into her past?

It was a wonderful experience living with my mother’s stories in my head as I wrote. I’ve written each chapter with care, and have deliberately used first person in each chapter’s introduction, as though the reflections were my mother’s.  I then conclude each chapter with a third person narrative assessment that speaks to the chapter’s lesson and take-away. It was an interesting literary exercise that I enjoyed.

What is it about your mother that has left a deep impact on you as a person?

My mother’s fierce independent spirit, and her ability to pick herself up after every setback has been so inspiring to me. Her pragmatism about life’s triumphs and travails is also something that has had a deep impact.

You say that your mother would always be encouraging you to try your hand at different creative activities. Tell us about them and as a regular teenager, did you resist?

My mother was a big believer in making every minute count. She felt that it was criminal to not live up to our full potential. We were fortunate to have been given opportunities to excel in many arenas. From dramatic arts to tennis to French classes at the Alliance Francaise. Even if we resisted initially we would always relent and then most often we were rewarded with success or achievement which as you know is its own motivation.

Remember the book 'Tiger Mom' written by the Chinese mother-author Amy Chua? Many Indian moms confessed to being one themselves -- was your mom one too?

I think in my mother’s generation most Indian parents were ‘Tiger Moms’. It’s particularly true of diasporic parents who left their hometowns to journey elsewhere -- whether to another city or another country. They had a motivation that was born from the challenges of navigating a new place and had aspirations for their offspring that were motivated by wanting more than what they had. 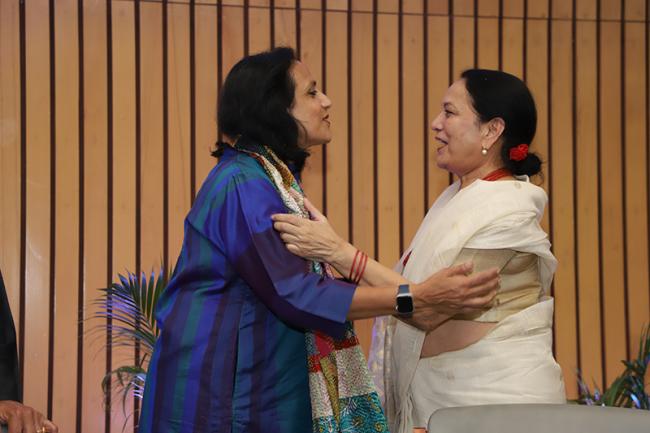 You had a brush with the glamour biz right from the time you were a baby… Later, you went on to become Miss Calcutta. Mothers of that generation generally kept their daughters away from showbiz, what made Lily Tharoor so different?

My father worked in the media and advertising world, so opportunities were different for our family. My mother’s childhood was in a small town but her life exposure was in the big cities of the world. She was fascinated by the doors that seemed to open for young women in ‘showbiz’ and truly imagined that we could embrace it all -- the disparate worlds of academics and glamour and glitz. Unfortunately for her – we turned out to be too ‘bookish’ at the end.

What is it about her that made you always aspire high yet remain grounded?

My mother’s need to reach for the stars was driven by her own inner spirit and not by the achievements of others. She has remained herself -- an interesting combination of rural traditions and urbane aspirations -- and is unaffected by social expectations or approbations. She speaks what’s on her mind and conducts her life and her relationships as she sees fit. Being authentic and grounded is our family hallmark.

How has your relationship with her evolved over the years?

Like most young people, I used to find my mother’s restlessness, ambition and drive for us to be ‘too much’ and wished that it were easier to make her satisfied. But my mother was the easier parent in terms of strictness and rules which made her a fun person to hang out with. And my father’s easy joy and enthusiasm at our every achievement balanced the stress of the demands to be perfect for our mother. My mother has an intuitive wisdom that we have all sought in our adult years.

Do you often see yourself as a close image of hers?

I have been told by many that I look and behave like my mother. Sometimes the remarks were made in exasperation by a family member, and sometimes in admiration. In either case, I always wore the comparison like a badge of honor. I don’t, however, see myself as a close image of hers.

Mothers and daughters are believed to share a very special bond. In fact, they become more like friends once the daughters grow up. What are your fondest memories of her?

Yes, I do believe that mothers and daughters share a special bond and especially after the daughter becomes a mother herself. The entire book is a tribute to my mother and every chapter is a fond memory. Another recollection that may not have been stressed on the pages of the book is of the many songs that she sang aloud when we were growing up. Her voice was strong, melodic and powerful. It was such a pleasure to listen to.

Mothers are believed to be biased towards their sons – did you and your sister feel that way while you were growing up?

That’s a generalization in my experience and not usually manifest in South India, especially in Nair tharavads that were traditionally matrilineal. The bias, is if there was one, is that there were fewer expectations of sons to know how to make that cup of tea or set the table formally for guests, which both Smita and I were expected to know in our teens.

If you were to describe your mother in just a few words, what would they be?

Astute. Beautiful. Curious. Driven – and these are words from only the first four letters in the alphabet.