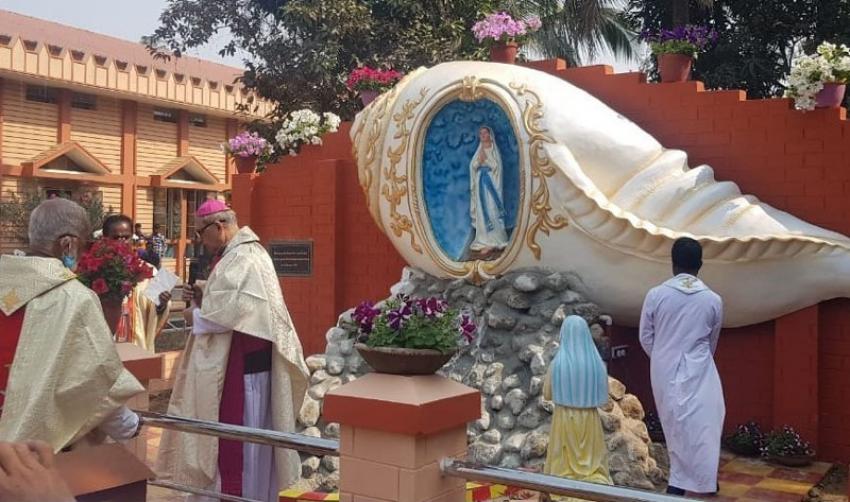 Bolpur, West Bengal: The Infant Jesus Church of Makrampur at Santiniketan in West Bengal has installed a Station of The Cross – depicting the crucifixion of Christ - and a grotto in the shape of a conch shell dedicated to the Lady of Lourdes.

“The Church, which is drawing a lot of visitors, has become a pilgrim centre in Birbhum district for people of all faiths since the Jubilee Year of Mercy declared by the Pope. It is an added attraction in Shantiniketan where people come to seek peace, tranquility and also appreciate the unique spiritual atmosphere.

"We celebrated a Feast on Feb 2, for the first time this year,” said Bolpur parish priest, Father Anthony Raj, who belongs to the Asansol diocese.

“This year the patronal feast was held on 2nd Feb with the inauguration of open air Stations of the Cross with some 54 life-size statues depicting the incidents in the final journey of Jesus carrying his cross to be Crucified on Calvary hill. It was during these pandemic times that our Parish Pastoral Council decided to put up the Stations of the Cross and a Grotto dedicated to Our Lady of Lourdes,” Fr Raj said. 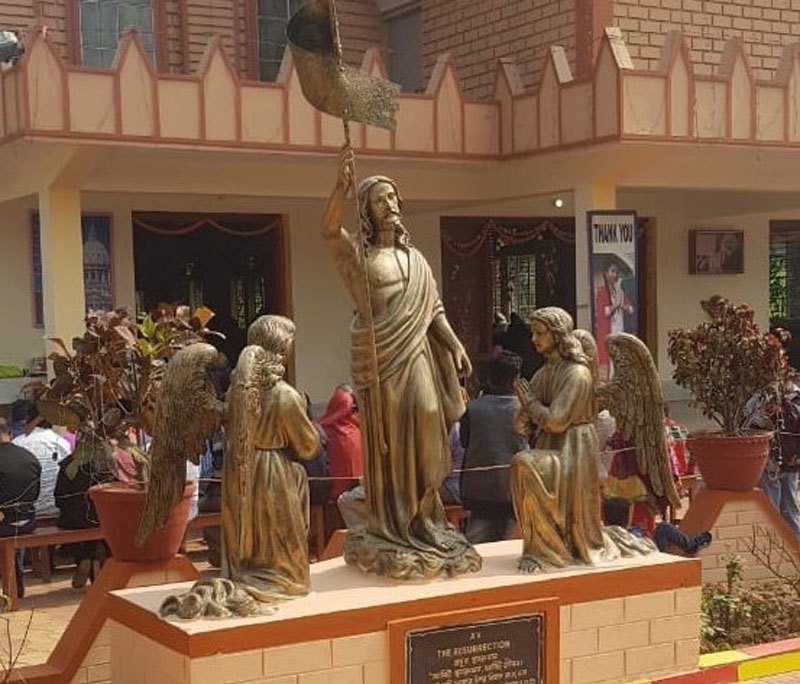 The Stations of The Cross, also known as The Way of the Cross, is a depiction of the crucifixion of Jesus Christ and accompanying prayers. The resurrection of Christ from the dead is celebrated as Easter - the oldest of Christian festivals.

The Infant Jesus Church has a statue of Jesus under an imposing banyan tree seated in a lotus position imparting his teaching and blessings to all. This is in accordance with the popular tradition of open air classes started by Kabi Guru Rabindranath Tagore.

The Church also has local Santhal tribal motifs and reliefs have been incorporated in the facade of the church designed and curated by Subrata Ganguly of Church Art of Kolkata - an art & design fabrication firm specializing in inculturation of local cultures in keeping with the canon laws and Christian traditions and conventions.

The same local tribal art forms have also been incorporated in the stained glasses adorning the church. There is also a statue of a mother holding a child and a lamb which is symbolic of an all-caring mother who is at the very centre of our community and social life.

“The Stations of The Cross has 54 life-size statues and the grotto, in the shape of a conch shell, is influenced by Indian tradition. We have incorporated the local traditions of Shantiniketan while trying to integrate the church decor with the artistic style and philosophy of Kabi Guru Rabindranath Tagore and also popular traditions like the open air classrooms which he had started,” said Subrata Ganguly, founder-director of Church Art.

Christian presence and influence was felt from the birth of Shantiniketan. Tagore had invited Bramhabandav Upadyaya the founding father of Indian Catholic theology, who spearheaded the Hinduisation of Christianity on the basis of his Thomistic reading of SaccidÄnanda.

From May 1981, Salesians from Joypur, Suri parish, looked after the Bolpur mission and Salesian Fr Cyriac Manianchira purchased a plot of land to develop the Bolpur mission. In 1993, Salesians handed over Bolpur subdivision to the Archdiocese of Calcutta and Fr. Valerian Fernandes was appointed first Priest-in-Charge.