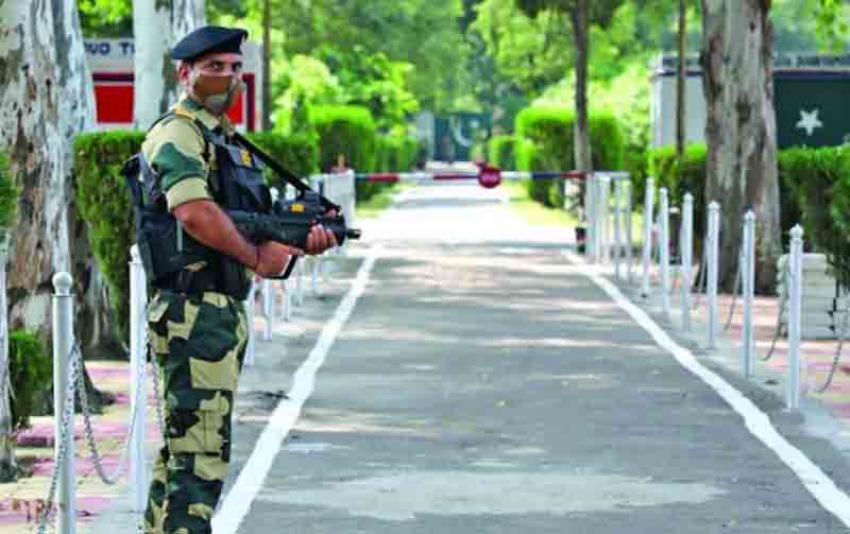 The people from different places in Jammu and Kashmir and outside visit Suchetgarh on the International Border in R S Pura, which is approximately 35 kms from Jammu city.

As the visitors reach there, they are greeted by tall, well-built armed Border Security Force (BSF) personnel with a smile.

The BSF officials told the Greater Kashmir that 1500-2000 people usually visit the border every Sunday.

“On every Sunday, a large number of visitors come and we also ensure a congenial atmosphere for them,” said a BSF official, who wished not to be quoted.

“As the border is well guarded, the BSF personnel welcome the visitors with a smile at the entry point. After their entry into the premises, the visitors have to undergo a proper checking. The J&K Tourism department has established a counter,” said a BSF official.

He claimed that the number of visitors increased after the unfurling of a 131-feet high tricolour – the tallest in J&K along the border with Pakistan.

“The BSF has also displayed remains of mortar shells fired by Pakistan on civilian villages and on the paramilitary personnel deployed there. Besides, several photographs of soldiers of Chamliyal and other BSF personnel who got martyred in cross border firing have also been displayed,” said the BSF officials.

Interestingly, the BSF, along with the Tourism department, has also preserved several rooms – which were once the part of Jammu-Sialkot railway station and in these rooms, the photographs of the defence and BSF officers highlighting their valour and courage while defending the country’s borders have been displayed.

Mohammed Nazir, a resident of Srinagar, told Greater Kashmir that he along with his family had come there as they wanted to see the International Border.

“The borders here are peaceful and they have become an attraction for all. It was a memorable time we spent together. We went back in history with this visit. The BSF welcomed us with great respect,” said Nazir.

He said, “We pray that the borders always remain peaceful as the hostility is not in the favour of any of the two nations.” Meanwhile, a BSF official said that many Kashmiri families visit especially during holidays. People from other parts of the country also visit the Suchetgarh border.

While showing a park developed for the visitors on the border, the officer said, “We have placed some benches also for the facility of visitors.”

“We have developed this park and the Tourism department is also coordinating. We work in coordination,” he added.

However, the people complained that the road towards Suchetgarh was in shabby condition and it required urgent repair and widening.

“The construction/repair work on the Suchetgarh road should be done at the earliest to encourage border tourism. We will work to promote border tourism. It should be developed on the pattern of Wagah border in Punjab,” said Taranjit Singh Toni, the independent member of Jammu District Development Council (DDC).