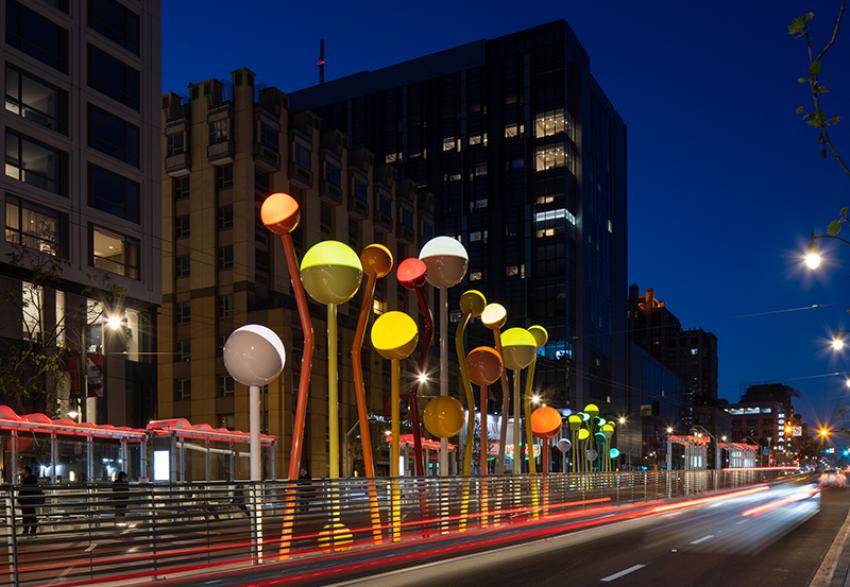 San Francisco: From Nov. 9 through the end of January, San Francisco transforms into a citywide gallery of art at night with 62 temporary and permanent light art installations.

San Francisco’s neighborhoods will transform into a luminous gallery of art at night during the holiday season for the 10th annual Illuminate SF Festival of Light.

Presented by San Francisco Travel Association and 5M, which is a vibrant mixed-use destination in the heart of San Francisco located at the intersection of 5th  and Mission streets, in collaboration with local civic, arts and cultural partners, the 2022/2023 Illuminate SF festival runs from Nov. 9 through the end of January and celebrates San Francisco’s vibrant art scene. 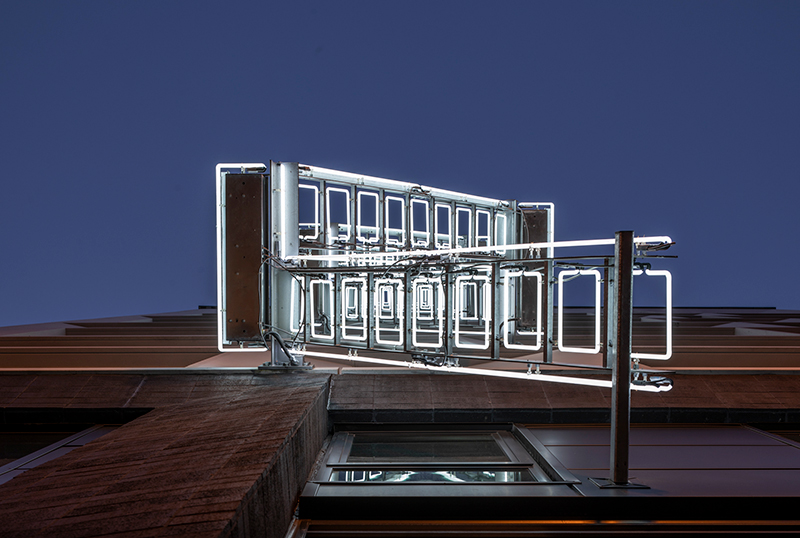 Inspired by the debut of Leo Villareal's The Bay Lights, San Francisco Travel launched the festival in 2013 to brighten the longest nights of the year. Illuminate SF has grown since its inception from six to 62 temporary and permanent eco-friendly light art installations created by a diverse array of acclaimed international and local artists, including Olafur Eliasson, Jenny Holzer, Daniel Libeskind, Jorge Pardo and Jerry van Eyck, along with San Francisco Bay-based Jim Campbell, Johanna Grawunder, Dorka Keehn and Brian Goggins.

Illuminate SF light art installations can be experienced across the city from the Embarcadero to the Inner Sunset, North Beach to Bayview, and while flying in or out of San Francisco International Airport (SFO). 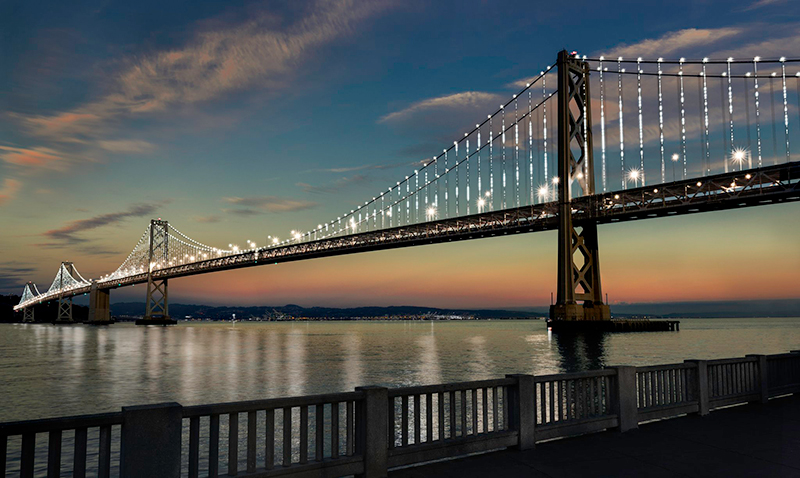 “There is nothing like celebrating the festive season in San Francisco’s captivating glow,” said San Francisco Travel President and CEO Joe D’Alessandro. “The city has one of the country&#39;s most extensive collections of light art, and this holiday season Illuminate SF will be even bigger and brighter. And in keeping with San Francisco’s ethos of inclusivity and accessibility, nearly 80% of the light art installations are free for visitors and residents to enjoy.” 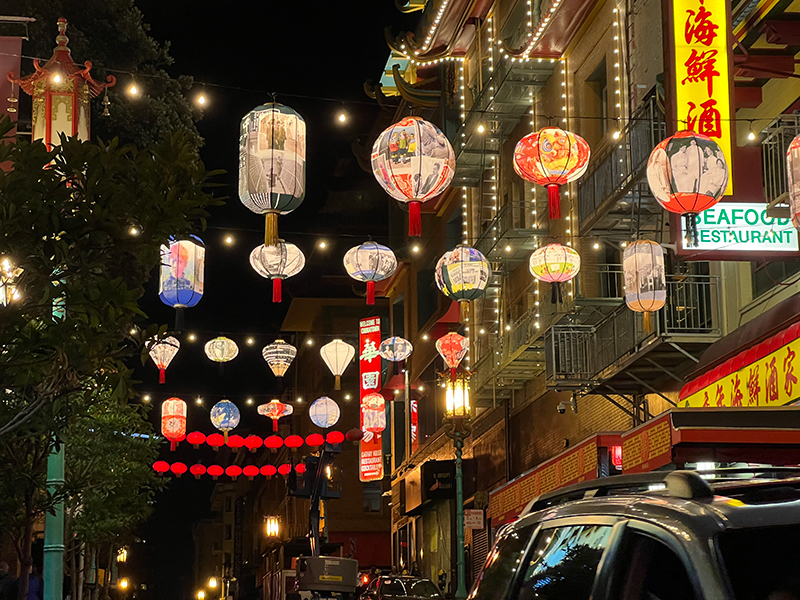 Christie Donnelly, Director of Development for Brookfield Properties, said: “We are thrilled to be the presenting sponsor for this year’s Illuminate SF and to showcase our majestic wind baffles that light The Parks at 5M."  “The Illuminate SF lighted art tour starts at 5M and is quintessentially San Francisco, uniting the community through arts, culture and experience.”

Spectacular New Additions to the Illuminate SF Festival of Light

The Wind-Baffles: The iconic wind baffle structures that anchor The Parks at 5M, a new, vibrant community connected to the surrounding fabric of San Francisco’s SOMA District by a cohesive network of public spaces, are the brainchild of Jerry van Eyck, founder of !melk, an award-winning urban design and landscape architecture firm. Built to mitigate wind, the baffles or “wind breakers” are artfully illuminated from the outside and complemented with a soft glow that radiates through the perforations in the upper zones. Though made from steel, a material associated with heaviness and industry, the baffles are often referred to as “flowers” for their stem and leaf-like design elements. Come nightfall they transform into breathtaking sculptures and suddenly seem to float. 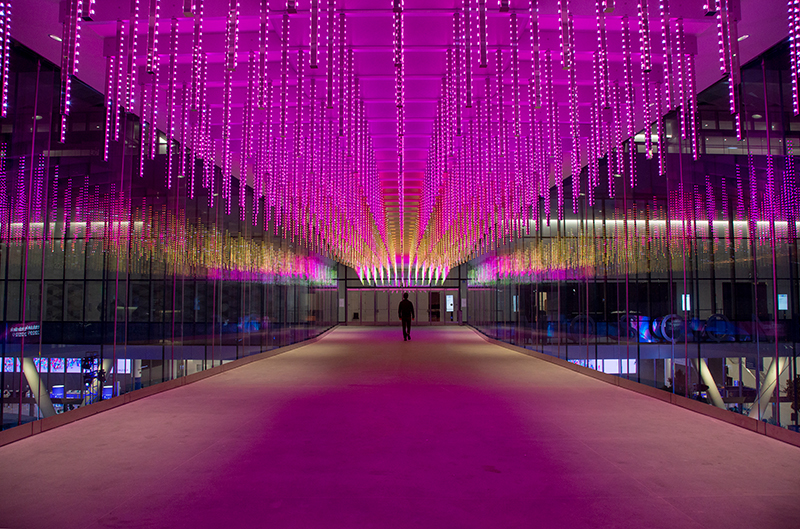 Helical Trace: A permanent installation inside the new LUMA Hotel in Mission Bay, Helical Trace is local artist Jim Campbell’s newest contribution to San Francisco’s Light Art Trail. The dynamic light installation can be seen from the street through the lobby’s floor-to-ceiling three- story windows. The prolific artist who installed Day for Night atop the Salesforce Tower created this striking installation that looks different from every angle and uses the reflection of the windows to amplify its movement. At a distance, the helix form gives the illusion of water across light. The figures within climb an infinite stretch of waterfall, allowing Campbell to create delight out of physical struggle. 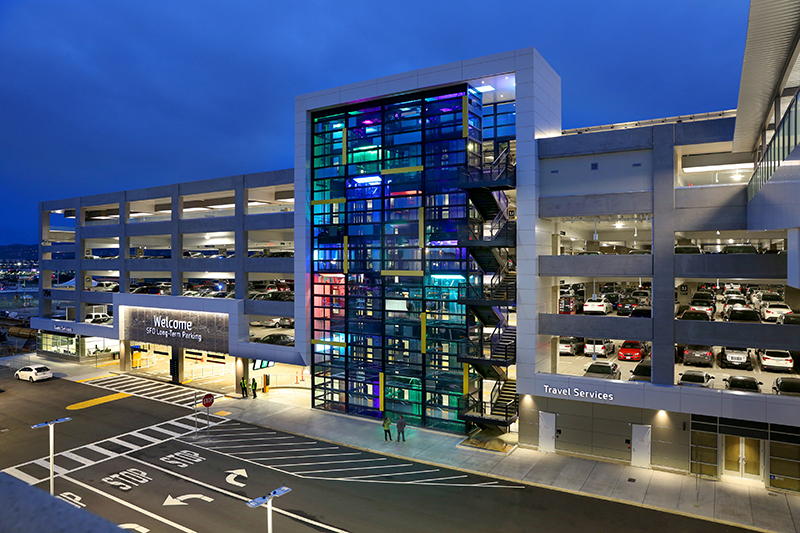 Bay towards the Embarcadero, allowing visibility along the shorelines in San Francisco, Sausalito, Emeryville and Berkeley. Based on a biological algorithm from over 10 years of research into starlings’ flight behavior, Franchise Freedom stretches boundaries between nature and technology and generates an impactful social connection.

Lucy in the Sky: One of two new light art installations joining the City’s extensive Civic Arts Collection, Erwin Redl’s Lucy in the Sky is a landmark artwork in the city’s new Central Subway (first opening for weekend service on Nov. 19). Located in the Union Square/Market Street Station, the immersive installation is comprised of over 500 translucent 10 x 10-inch light panels, each containing an array of color LEDs. The panels are suspended along the entire length of the concourse level’s ceiling, spanning nearly 670 feet. Installed in a diamond-shaped pattern, the light panels are computer programmed to slowly change color and display simple patterns, creating a kaleidoscopic experience. 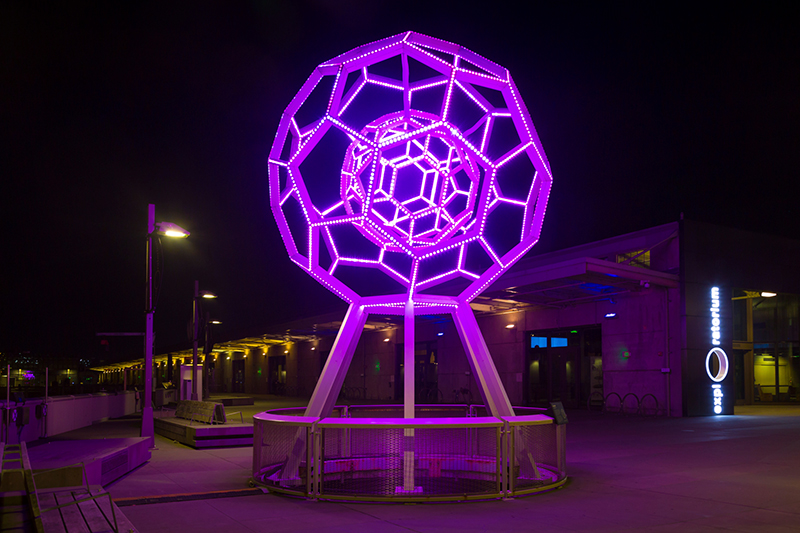 Peace in the Middle East: Taravat Talepasand’s Peace in the Middle East returns as a permanent installation in the Yerba Buena Center for the Arts’ Grand Lobby. Hung from the ceiling, this intricate neon artwork (featuring the word “peace” in Farsi) explores the cultural taboos that reflect on gender and political authority through Talepasand’s lens as an Iranian-American woman. 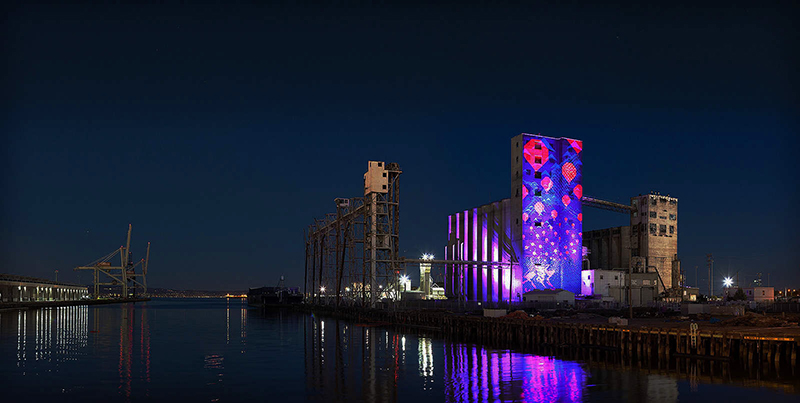 Lantern Stories: San Francisco: This public art installation of 29 illustrated lanterns by award- winning interdisciplinary artist Yu-Wen Wu illuminates San Francisco Chinatown’s history, culture and community. Creating a luminous canopy on the 600 block of Grant Avenue, the lanterns relate the long and fraught history and legacy of Chinese immigration in the U.S. They feature images of Bruce Lee, Amy Tan, journalist Helen Zia, pioneer restaurateur Cecilia Chang and others. Many highlight the arts, calligraphy, music and performance, as well as the community’s strong commitment to education, entrepreneurship and social justice.

GLOW: Discover the Art of Light: The Exploratorium is bringing back its popular – GLOW: Discover the Art of Light from Nov. 17 through Jan. 29, 2023, with six artists illuminating Pier 15 with light sculptures big and small. Five of the seven installations are new. In Gallery 3, Jen Lewin’s The Last Ocean is an expansive landscape of interactive platforms that illuminate to resemble a glowing ice field. Created from reclaimed ocean plastic, the platform’s five-sided pieces form a beautiful geometric tessellation — a repeating pattern of flat shapes with no gaps. 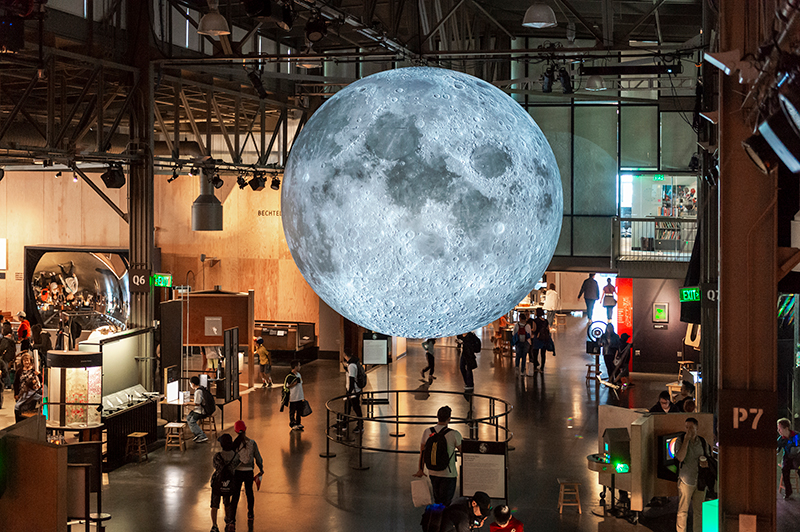 In the Black Box, Anila Quayyam Agha’s All the Flowers are For Me is inspired by Islamic textiles, architecture, and floral motifs. A single beacon of light glows from within a suspended steel cube, producing immersive patterns that ripple and change as visitors move through the space. Similarly, Agha’s Teardrop (after Robert Irwin) interweaves delicate, traditional Islamic decorative geometric patterns and architecture with modern materials. The work is inspired by jaalis (intricate, carved screens), which cast moving shadows as the sun rises and falls.

Entangled Attraction and Raylights, a pair of installations by Resonance Studio artists Sally Weber and Craig Newswanger, immerse visitors in trails of light in motion. Entangled Attraction features 100 pinpoints of light that appear to orbit around each other when viewed from afar, while Raylights produces ever-changing, mandala-like light patterns synchronized to ambient sounds. 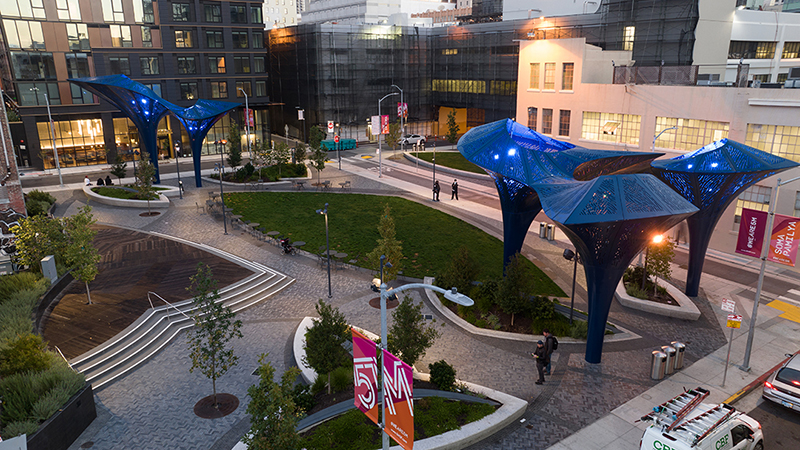