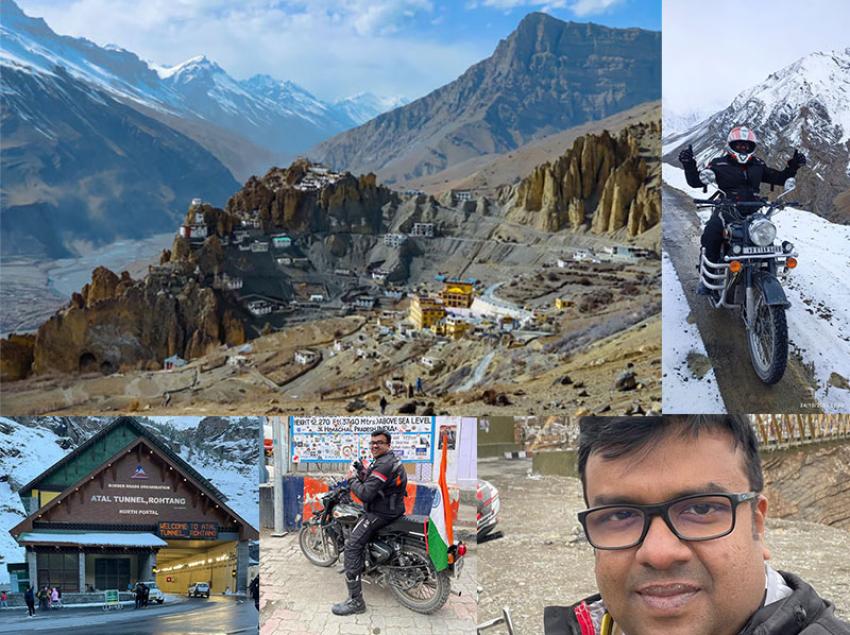 A Kolkata-based bike riding group called Roaring Royals (founded in 2018) decided to test their mettle by planning big for their October 2021 expedition. Here is a glimpse into their interesting journey from the pages of rider Arnab Chanda’s travel diaries.

“We had travelled to Bhutan, north Sikkim and north Bengal in the past three years,” said Arnab Chanda of the biker team, “and this year we decided to undertake something big. The team planned to explore the Lahaul and Spiti district of Himachal Pradesh in October [2021].”

According to plan, the team would be starting from Kolkata on the 15-day trip, which would see them ride 5,000 km through diverse routes across the plains and mountains to the north of the country. 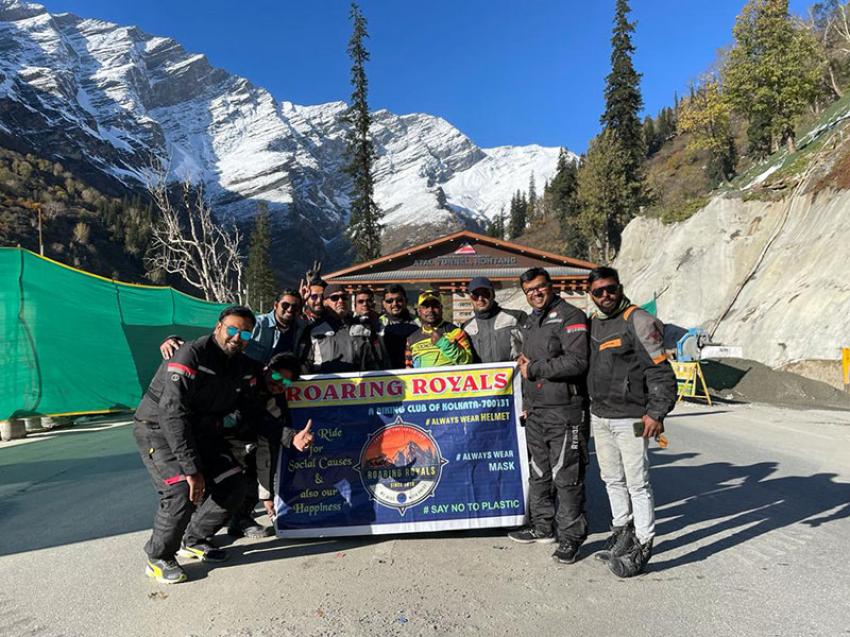 The biking team consisted of 11 riders.

At the stroke of midnight on October 16, the team started off from Kolkata in great spirits. Riding through the low-lying plains of West Bengal, Bihar and Uttar Pradesh, they reached Varanasi the following evening.

Heavy rainfall and thunderstorm awaited them as they rode into Agra the following day but the inclement weather could not stop the eager riders. They took a round of the city and its sights.

On October 19, they reached Karnal in Haryana.

“Throughout these three days, we had only ridden in the lowland areas and did not know what adventure had been awaiting us,” said Chanda. 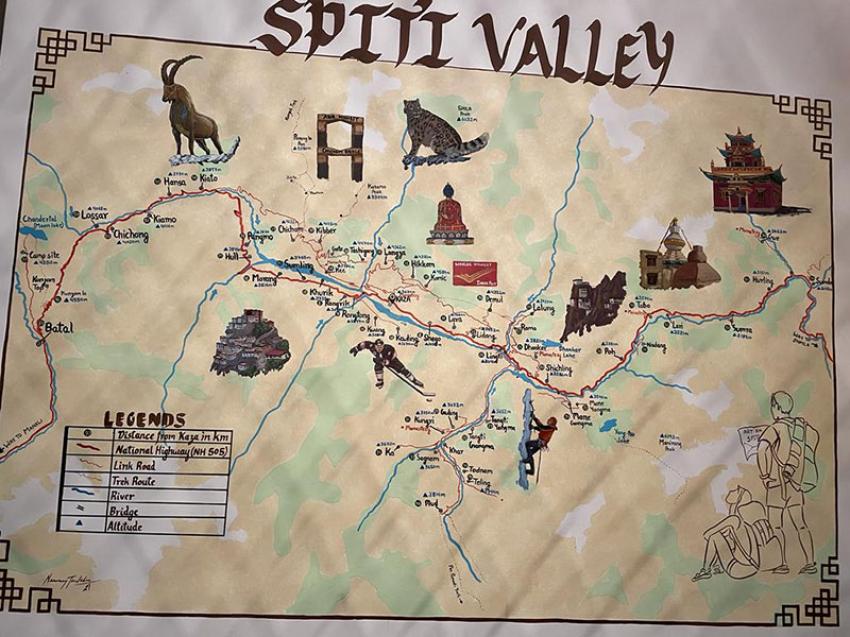 The fourth day of the ride gave the riders their first taste of the mountainous terrain, when they left Karnal for Narkanda in Himachal Pradesh.

“The temperature had started decreasing and it was gradually becoming difficult for us to ride our bikes continuously for a long time,” said Chanda.

“This stretch was one of my favourites,” Chanda would later say, “not only for the beauty of the route but also it gave us an opportunity to camp out among the mountains. The temperature had gone down to minus 2 or minus three degree; later in the night we found snow outside our tent.” 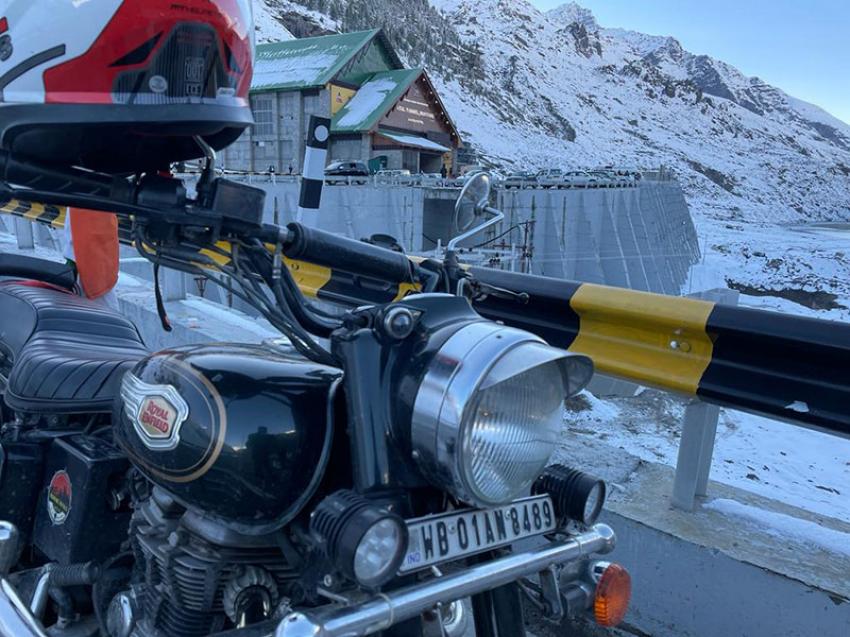 “The day temperature kept dipping as we rode higher and higher. As a result, we had to often take breaks,” said Chanda, “But we had also set the target to reach our destination before nine o'clock so that it would not get too dark.”

On October 23, the seventh day of the ride, the team pushed themselves and their machines up the increasing altitude to Kaza which was almost 3,800 metres above sea level.

However, at Kaza, they found it had started snowing.

The team concluded that the continuous snow fall would make it difficult for them to push forward.

Instead, they decided to extend their stay in Kaza and spent the day sightseeing and holding photo-sessions at some of the most picturesque spots.

“One of the spots which the team enjoyed was the Chicham Bridge, which is the highest bridge in Asia,” he said. 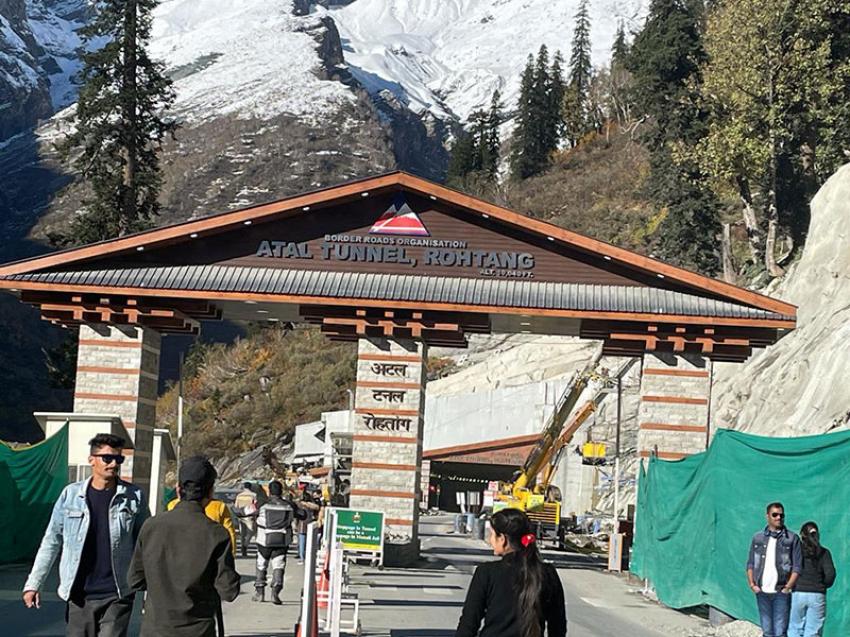 Their initial plan had included camping near Chandra Taal (a lake at nearly 4,250 metres above sea level).

However, with the region receiving its snowfall ahead of the usual time, most of the places on the higher parts had been closed. Their plans of visiting Hikkim village, said to have the highest post office in the world, remain unfulfilled.

Even though the team did ride to higher altitudes, they had to set up camp at a place which was below Kaza.

The team rode into Manali the day after and spent the night here. The following day, they visited the Atal Tunnel and also did some quick shopping in Manali.

By the time Chandigarh (on the morrow) loomed on the horizon, the team was exhausted but happy with their achievement.

“However practical considerations kicked in,” according to Chanda, “because some of the new members were too tired to ride their bikes back to Kolkata.”

Both men and bikes completed the return journey to Kolkata by train.