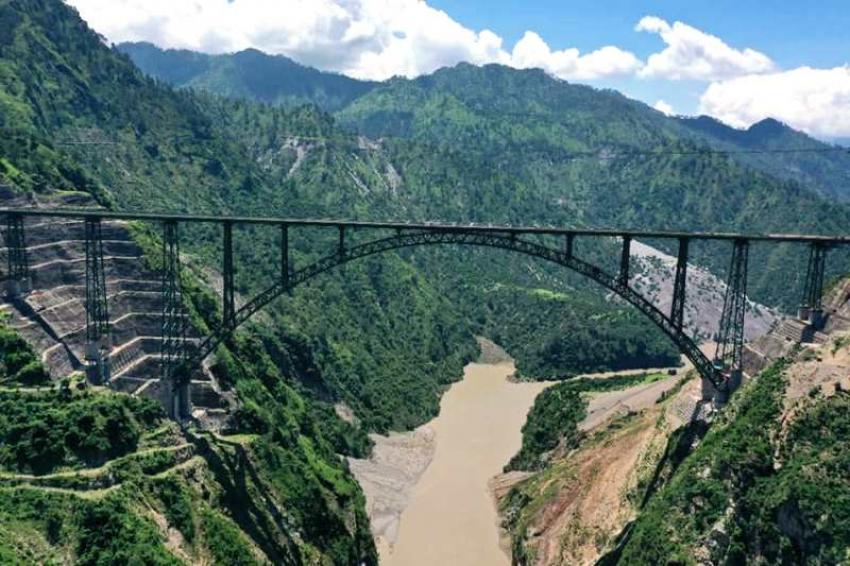 Srinagar: Jammu and Kashmir witnessed a glorious moment recently when the 'Golden Joint' of the Chenab railway bridge was launched on Saturday.

With this step, the world's highest railway bridge was inaugurated.

The workers, who were associated with the creation of the bridge, decorated the world's highest bridge in Reasi district with the tricolour.

It was performed as a part of the  'Azadi Ka Amrit Mahotsav'.

The workers celebrated the moment by hoisting the national flag.

The Ministry of Railways tweeted: "Our national pride flying high at world's highest Railway arch bridge, Chenab bridge, as the Golden Joint work is finished today. With this, the deck of the bridge stands completed."

Locals are elated that the construction of the bridge and rail connection will better their lives.

“We hear trains will be run next year. Since there’s a railway station near our village, I can send my produce to Srinagar or other parts of the valley,” Mohan Bagat looking at his maize told Village Square.

“So far I’ve not been able to sell my maize outside Ramban town. But now I hope to get good returns by sending it to better markets,” Bagat said.

“Fifteen years ago when I heard the news on the local radio about a proposal to run a train between Udhampur and Srinagar, I remember having a sarcastic laugh,” Ghulam Mohammad Wagay, who sells shawls, told the portal. “Now I see that it has become a reality.”

“Since the bridge has been inaugurated now, the work on laying of railway track will start soon,” Sanjay Gupta, Chairman, and MD of Konkan Railway, the main railway company working on the USBRL project, told Village Square.