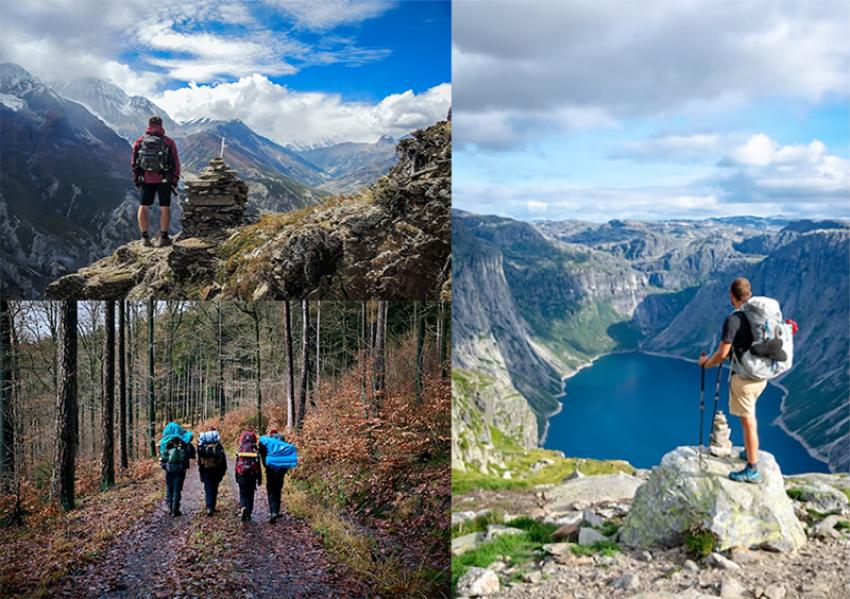 Travel has a notorious reputation for being expensive, disconnecting and time consuming. At the same time, millennials have an equally notorious reputation for being kinda poor, plugged in, and unable to take time off from work. So how is it that millennials are some of the most well-traveled people in modern history? How have we managed to take the traditional ways of travel and turn them on their heads? The answer: backpacking.

Backpacking is a somewhat rough-and-tumble DIY style of travel that features hostels over hotels, buses over planes, and street food over restaurants…and millennials have embraced it in droves. Millions of twenty and thirty-somethings have taken travel into their own hands, deciding that they don’t want to wait for retirement to see the world, and have found that backpacking is the life hack that can get them there. Because backpacking trips are designed for a millennial audience.

Hostels, tour companies, gear companies, and more have all embraced the millennial demographic, catering their services to these new DIYers who are desperate to see the world. How so? Let me explain.

The first and most tantalizing reason why backpacking is the way to go for millennials is that it’s by far the cheapest style of travel. We millennials have been called “the poorest generation” plenty of times by plenty of people, and for those of us who don’t have an excess of money to set aside for travel, backpacking is the gold standard for getting us there…but, ironically, it comes with a price. When it comes to backpacking, there’s no way around it: it’s roughing it — meaning, it’s no-frills, bare-bones, and absolutely not luxurious. Backpackers definitely don’t stay in expensive hotels, fly first-class, or dine at five-star restaurants. Rather, they spend their nights in hostels, eating street food and taking local buses from city to city. If you opt to backpack, you won’t be living in a sanitized and comfortable bubble while you’re away. Instead, you’ll be face to face with the knitty gritty reality of low-cost travel. The silver lining to this sacrifice, however, is that you won’t have an enormous bill at the end of it all because all these means are very affordable and surmountable for people in our tax bracket. Also, not for nothing, traveling in this way (i.e. eating from local markets, riding the same buses as the locals) forces us to experience our destinations from the perspective of someone who lives there rather than as a distanced guest who’s there looking for the hotel’s room service. That’s why this is really the most authentic way to see a country!

Hostels Are Designed for Millennials

I’ve called hostels the lifeblood of backpacking before and I still stand by it to this day. Hostels have an unfortunate reputation of being dingy, run-down shacks filled to the brim with smelly travelers in tiny dorms. But as the world’s grown more connected, and as people have begun opting to backpack, hostels have transformed into lovely havens that weary travelers can feel good about staying at. Hostels nowadays feature clean beds and reasonably-sized dorms, and often come with common areas, bars, lounges, restaurants, and sometimes even pools. They’re totally designed to foster interaction and camaraderie between travelers, all of whom happen to be within the certain millennial age bracket (some hostels even have an age cap at 40). Not only that, they know that we millennial travelers like convenience, and they therefore often have city information, tour-booking services, and bus-ticket purchasing options at the front desk to make our stays more streamlined and easy. You get all of this for a really reasonable price, ranging anywhere from $5 a night (in places like Southeast Asia & South America) to $30 (in Europe, Japan and North America).

Do It While You’re Young!

One of the most common pieces of unsolicited travel advice I get from other generations is that I should wait until I’m older to go exploring. Now I don’t know about you, but when I travel somewhere, it’s often to see some sort of nature that I can’t see back home…and whether that takes the form of jungle ruins or the top of a volcano, there’s no doubt that getting there can be a challenge. It’s really no surprise that some of the most iconic places in the world are hidden deep in the depths of the jungle or at the very top of a mountain, and as such, many of these sights require plenty of trekking, and even some camping. If that’s the case, why not tackle these challenges now while you’re young and physically able? I did a four-day hike in Colombia at the age of 26 that totally pushed my body to its limits. Was it hard? Absolutely. Could I have done it later in life? Definitely not. Was it worth it? 100%. And in the end, the reward of reaching the end of that hike felt ten times more gratifying knowing how hard I worked for it. Hiking can be difficult, but I recommend you embrace the challenge and recognize it as something that you can only do while your body is able!

One of the most common stereotypes about millennials is that we’re addicted to our gadgets. How many of us check our phones dozens of times a day, making sure we receive every text, know of every plan, see every photo our friends are posting? Well, I guess we are addicted! However, when you backpack, you’ll find yourself somewhat forced to unplug because chances are you won’t have cell service on the opposite side of the world. Are your palms sweaty from just reading that sentence? Don’t worry! In my experience, backpacking is one of the few things in the world that successfully makes me want to unplug. Think about it. How is it possible to get FOMO (the fear of missing out) when you’re out in the world doing some of the coolest stuff the planet has to offer? Do you really care about your friend’s instagrammed diner meal when you’re scuba diving in exotic coral reefs? Does it really matter that you missed a party when you just spent the past two days hiking a volcano in Central America? When you’re forced to be disconnected from your phone because you’re doing fun stuff, you’ll find that you really don’t miss the distance, and that the phone will always be there waiting for you when you get back.

To being able to travel is an amazing thing, but we millennials don’t need to think of it as this big, intimidating and unachievable goal. We can see the world on a shoestring budget by getting cheap air tickets to practically anywhere, we can see the world without sacrificing our jobs, and we can see the world authentically and responsibly if we just amend the ways we’re used to traveling. I implore everyone to try backpacking trips at least once in your life. It’s an experience that has not only connected me with other parts of the world, but has connected me with other millennials on opposite sides of the globe. People with whom I thought I had nothing in common until I met them for a beer at a hostel bar!