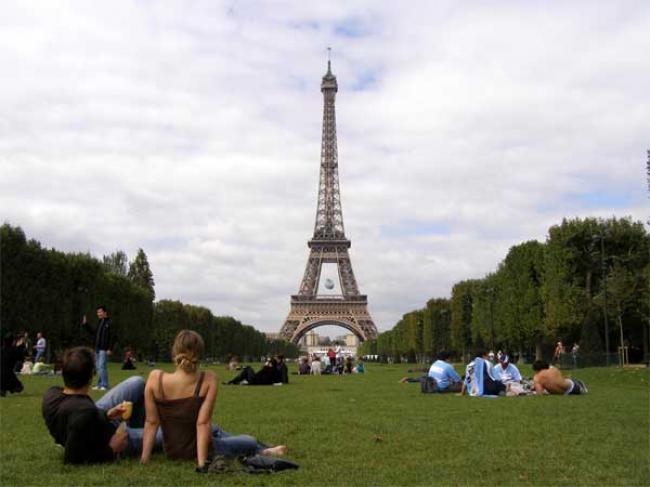 I checked out of the hotel at noon and reached the Paris East station for my train to Germany- lock, stock and barrel. I knew that the barrel of Paris memories was short of one done-to-death tourist experience. I had not taken an elevator to the top of the iconic Eiffel Tower, at the sprawling base of which I spent many hours, even taking a siesta in the luxuriant public lawn it overlooks.

The long, snaking queue of tourists to climb atop the world’s most visited paid monument was a big put off for me. Some said it could take almost three hours of wait. So I was bidding farewell to Paris without carrying back an Eiffel eye view of the come-hither city.

But destiny, or rather Euro Rail, willed otherwise. Mousier Eiffel was in store, so was a brush with the tower’s heavily armed guards and finally a sleepless night in Paris.

My reservation to Frankfurt was not confirmed. The next train was in the early morning. Adding to the worries of a shoestring budget traveller, my rucksack stuffed with inconsequential  bric-à-brac, symbols of my often chaotic travels, rebelled. Overstuffing simply tore it up.

I am an Indian backpacker, always living frugally when abroad on my own and so not unaccustomed to derailments of schedules. I always have my share of quirky experiences.

But all’s well that ends well.

It was a “been there done that” tour of Paris and a visit to the Eiffel observation deck was a must too.

Louvre topped the Paris must sees, besides soaking in the free spirit of the city itself. The walks tours are best way to see Paris and its landmarks like the Notre Dame Cathedral or the Champs-Élysées, the prestigious avenue abounding with cafés, cinemas, theatres and chestnut trees that are illuminated every night.

To explore the fabled Paris of high fashion, you need not go to a ramp show. Just look around. The elfin Paris women are disarmingly charming and they roam around in stilettos and designer clothes or just sit unflappably beside you in metros. Only you are sweep you off the feet.

I found the Monalisa disappointing after lifetime of wait, but Louvre was awesome. I sat by the glass pyramid now made famous by Dan Brown and the celluloid adaptation of The Da Vinci Code.

But when my bag snapped and even its handle came off, I had no other option but to head for the cheapest looking departmental store around Paris East station. I found one near the Gare du Nord (Paris Nord), one of the terminal railway stations in the vicinity of Paris East.  Stowing the precariously managed luggage to the store was a daunting task.

Denied boarding the train, two thoughts crossed my mind. I must go and climb atop Eiffel, and I must keep my luggage in the safe custody of the station’s locker room. But the hours of the locker room, that too available only at the Gare du Nord up to which I stowed the torn bag, simply  left me with one option- to brace up for carrying the tacky newly purchased trolley bag with me.

I tugged the trolley bag behind and went to the nearest metro station. Disembarking at a station close to the river Seine, I pulled off with the bag to reach a pier and waited for the spanking tourist vessel to arrive.

I was happy I could treat myself to a cruise finally to reach the Eiffel by Seine. The luggage resting in the cruiser deck, I leisurely watched the famous bridges slide by as we passed through the archways.

Reaching Eiffel Tower was one of the most exciting experiences, but more deterrents were in store.

I was simply not allowed to climb the tower with the weighty luggage, leaving me desperate and depressed.

I though I cannot afford to meet with two failures on a single day, that too in this magical city. I requested every kiosk and shop owner at the base of Eiffel to keep the bag for an hour or two. It was wishful thinking and none agreed, expectedly.

I had almost given up when I came across a group of discerning looking young men. They were waiting for one of their friends who had gone up.

Well, I could see a ray of hope in the boys, all engineering students. I struck up a conversation and requested them to look after my bag till I come back from the tower top. First the answer was a firm “no”. Now the discussion veered around our commonness. Well, it is communist rule in both Venezuela and my state West Bengal. Communism and its attendant criticism came handy.

The rookies crumbled, the leader of the group granted me only an hour after frisking my bag for any suspicious object.

Leaving my luggage to some unknown Venezuelan students I rushed to climb up. I was carrying in my person my passport, the euros and the faith in human goodness. Even my laptop was left on the ground.

The view of night Paris from the top was worth all the hazards and hurdles. The view was breathtakingly majestic and the ambience on the top was hopelessly romantic. The kissing couples can remind of films shot atop, including of flirtatiously coy Sharmila Tagore romancing Shammi Kapoor in the 1967 blockbuster An Evening in Paris.

For once I forgot the luggage left at the mercy of strangers. That Paris night atop Eiffel was frozen in time for me. An hour evaporated.

When I came down, I found the entire Eiffel compound empty. The tourists had dispersed. Far away right at the bottom of the tower I spotted my bag lying orphaned. The boys were not around. I rushed to its rescue. As I grabbed the bag I saw some shadows encircling me. I looked up and saw the grim, suspicious faces of armed protectors of the tower staring at me. I was a nervy moment.

“Whose bag is this?,” asked a gun-toting lady of possibly the Paris National Guard. I was wondering how to convincingly explain the adventure, the lure of Eiffel over my luggage, the lifetime of wait for Monalisa and an iron tower.

Scared of being detained by the cops for interrogation, I looked around for the boys. Suddenly the leader of the team could be spotted. Rather he spotted me and shouted. For both of us it was like spotting a tiger at Sariska.

He was relieved to see me back. I learnt they called the guards smelling something fishy about my long absence. It was a happy ending and I got a life.

Postscript: But that was an eventful Paris night. A night without end. Stowing my weighty luggage again, I went to the station- Paris East- hoping to spend the few hours left for the morning train on its complex. I found the station closed. I had no idea that a station in Paris could actually be shut down for the night like a shop. It was cold outside and people were drunk, some boisterously merry. Many were dancing in the cluster of café’s and pubs overflowing with visitors. I saw a bus waiting outside at a depot across the station. I discovered it would return to the same spot after a round of the city. I boarded it, secured my luggage neatly under the seat and boosted myself for having made my arrangement for the night for less than two euros. The sinful Paris night of fun and frolic, of Moulin Rouge and illuminated monuments, unfolded before my eyes as the bus cruised along. In the morning I left for Frankfurt.