Travelogue
Forest
In search of GIB 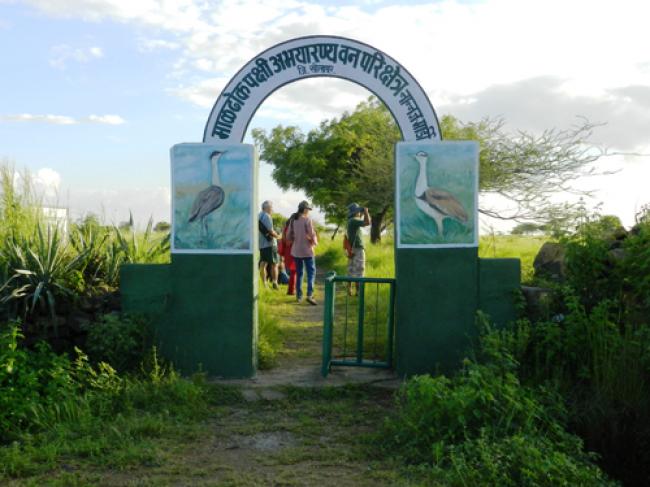 The Great Indian Bustard was once in the race for the title of the national bird of India. Today it is fighting to stay alive. Uttara Gangopadhyay has a rare encounter with the birds at Nannaj in Maharashtra.

Was it the revenge of the birds for driving them to near extinction? Cooped up inside the observation hut, our cameras and binoculars panning the grassland, we looked hard at every moving speck. But the birds seemed to elude us. If we arrived early in the morning, they stayed away; if we arrived in the late afternoon, we were told the birds had just crossed by, or had taken a late morning stroll. It was the last run of our trip and the silence that hung over us was so palpable, that you could run a knife through it. As a faint brown and white patch shuffled next to a distant thorny bush, we held our breath in expectation – would we be lucky on this fifth visit in two days to the Great Indian Bustard Sanctuary in Nannaj?

About 20 km from Solapur (Maharashtra) town, Nannaj is a small village off the Pune-Solapur Road. The agricultural lands and grasslands around the village are home to many bird species, apart from black buck, wolves, foxes, etc. In fact, a stop for tea at the local bus stop turned into a bird watching session – much to the delight of the local people - when one of our group members spotted a pair of red headed merlins on a communication tower. In between paying visits to the sanctuary, we also toured the surrounding countryside and were rewarded with abundant bird sightings, from various kinds of larks to munias, silverbills, bushchats, francolins, shrikes, and other commonly found birds. We also paid a visit to the Hipparga dam; owing to the prolonged monsoon, the water level was high but still we got to see cormorants, coots, and a few ducks.

To enter the Great Indian Bustard Sanctuary, one has to obtain permission from the local forest department, a short drive from Nannaj bus stand. There is a small nature interpretation centre here that provides an overview of the local flora and fauna. On the opposite side of the road was the Forest Bungalow, simple but adequately furnished.

Another short drive and we arrived at the sanctuary gate. We had to leave our car behind and enter on foot. Right next to the gate, there is a watch tower, ideal for getting a bird’s eye view of the vast grassland. We saw a few blackbucks grazing in the distance. A narrow path led from the gate to the observation hut. Visitors are required to stay on this path to reach the hut. Inside the hut, windows were cut low into the walls. One could sit on the benches and peer through these windows; photographers can rest their cameras on the window ledge. The forest guard stationed at the hut told us not to loiter outside as the birds are very sensitive and may not appear in the open if they feel disturbed.

Once in the race for being named the national bird of India, the great Indian bustard (Ardeotis nigriceps) – one of the flagship species of grassland birds - has been climbing the charts to extinction, threatened by habitat loss and hunting. In India, the bird is found only in Rajasthan, Madhya Pradesh, Gujarat, Maharashtra, Karnataka and Andhra Pradesh. According to most experts, grasslands in India are not appreciated for their ecological value but seen as waste lands. In many areas, grasslands are being converted to forest/agricultural lands or being taken over for commercial purposes. Such conversions are not only destroying the resident fauna (birds, deer, fox, other animals), but also destroying the fragile ecological balance.

The Great Indian Bustard (GIB) is an indicator species of the grasslands, says Sujit Narwade, researching on birds of Deccan Plateau in Maharashtra with focus on the GIB. According to him, “Grasslands provide services such as water purification and regulation, pollination and seed dispersal, climate regulation (local through grass cover and global through carbon sequestration), fuel, food, sanitation, soil development (conservation, formation), water regulation, primary production, nutrient cycling, fodder for cattle grazing, and tourism in selective areas; if the GIB is critically endangered, it means the grassland ecology of that area is also under threat.”

Of late, the various state governments are waking up to the urgency to protect the GIB. The central government’s ministry of environment and forest has also put forth a species recovery plan for the bird. But most experts feel that to protect the GIB, one has to work in closely with the local people.  According to Dr Pramod Patil, working for conservation of the GIBs, in conjunction with BNHS, "The conservation policies have to involve the local people too. Many of our grasslands are private property. Hence, we have to convince these people that protecting the GIB will help them economically; we cannot protect the bird in isolation. GIBs know no boundaries created by man. They will move freely from protected reserves to private pastures as they forage for food. That is one of the biggest threats facing the birds today. To protect the GIBs, we need to have holistic planning."

Back at the sanctuary, a few more tense moments and then slowly, the birds came into clear view, standing tall and proud, indifferent to the pairs of eyes fixed on them from afar. The male  distinguishable by its black cap and stouter than the females. The silence inside the hut evaporated in frenzied camera clicksand muffled exultations. We had finally managed to see the elusive birds.