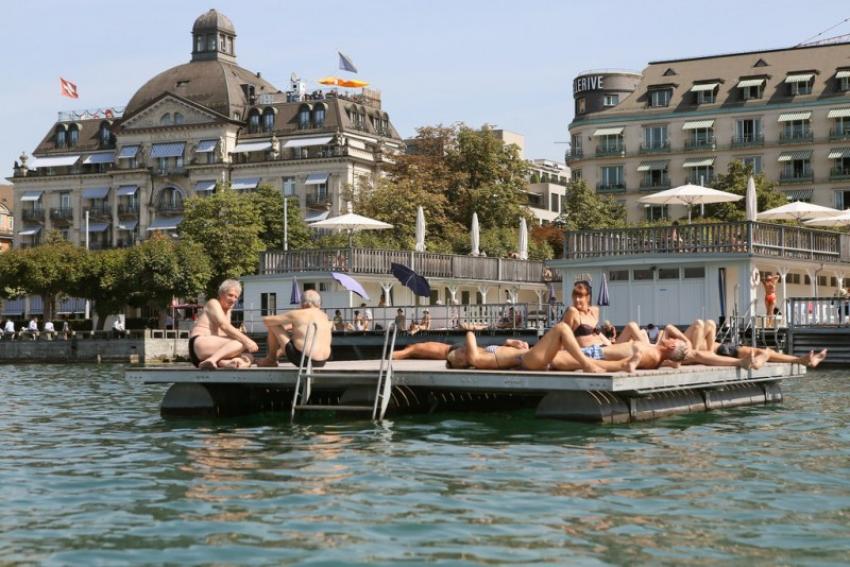 As drinking water crisis finally stares our cities, any Indian tourist visiting Zurich, the gateway to the Swiss Alps, will be pleasantly surprised to find some 1200 public fountains to slake their thirst and say no to packaged water in eco-unfriendly plastic bottles. Sujoy Dhar was smitten by the city of free freshwater, quaint cobblestone streets and the legacy of legends like Albert Einstein.

SAFE, pleasant-tasting drinking water flows from the city's water taps and some 1,200 public fountains, boasts Zurich Tourism.  Once you are in Zurich and start exploring the city and its old town with cobblestone streets, you know what they mean.

So as you explore this gateway to the Swiss Alps and once the home of geniuses like Albert Einstein or James Joyce, you will catch a glimpse of people actually leaning before a decorative fountain and drinking water on the streets.

In Zurich you can simply do away with purchased mineral water bottles.

As Zurich Tourism boasts: "Those who get thirsty while exploring Zurich do not need to look for a supermarket. A drinking bottle is enough – such as the top-quality, reusable, and ultra-light Sigg bottle that can be bought at the Tourist Information. Simply unscrew, fill up, and enjoy the cool, fresh drinking water."

Anyone interested in finding out more about Zurich’s innumerable fountains can book the city tour, “Water in Zurich”.

Zurich in the heart of Europe is the gateway to Swiss Alps.  Today it is a city of creative urban life, clean water and green open spaces. The city on the River Limmat pulsates all year round.

River Limmat perhaps has the cleanest water in any world city.  According to Swiss authorities, ERZ (Zurich Disposal and Recycling Services) cleanses between 150,000 and 500,000 cubic meters of sewage water and the same is released back into the Limmat River as clean water.

The Old Town with cobblestone streets

Any tourist would like to explore the most atmospheric part of a new town or city they are visiting. In Zurich, it is the Old Town with cobblestone streets lined by the beautiful 19th-century buildings and  lanes.  The Old Town offers fascinating insights into the city's history.

In Zurich, do not miss that two-hour walk in the Old Town to discover the city´s past in its hidden alleyways, fountains and squares.

The medieval background of Zurich's Old Town will charm you as you discover it as a melting pot of cultures and history with a famous shopping district thrown in for good measure.

Marvel at the medieval houses, the narrow lanes and town halls from the Renaissance period.

Some of Zurich's big attractions are here.  The double towers of the Grossmünster (Great Minster), which is a Romanesque-style Protestant church in Zürich, are here.

According to legend, as quoted by Swiss Tourism, Roman emperor Charlemagne had built the towers at the location where the graves of the city saints Felix and Regula were discovered. Further sights worth seeing include the Peterskirche (Peter's Church), which has Europe's largest clockface, and the Fraumünster (Minster of Our Lady), which is known for its stained glass windows by Giacometti and Chagall.

One must also walk uphill to spend time at  The Lindenhof (courtyard of the lime) with public square and its hilltop offering sweeping view of Zurich.

Lindenhof was also the scene of many historical events. In the 4th century a Roman fort stood on Lindenhof – and in the 9th century the grandson of Charlemagne built a regal palace as place of residence on the very same site.

This area continued to be a place for gatherings for Zurich’s inhabitants right up to the beginning of the modern era.

“This is the perfect place to switch off, with the view of the Old Town, the Limmat, and the mountains in the distance,” says Marco Uhlig, a Zurich nightlife expert, manager of the popular gay club Heaven and co-organizer of the Zurich Pride Festival.

Lunch at the oldest vegetarian restaurant

Well,  after the walking tour of Old Town in the morning, it is usually time for lunch.

We suggest a lunch at Hiltl, the world's oldest vegetarian restaurant (since 1898)  in the heart of Zurich, near the Bahnhofstrasse.

Hiltl offers something for everyone- freshly prepared food and beverages in a relaxed ambiance.

Since 1898, this restaurant – which is named for its founder, Ambrosius Hiltl – every day concocts a variety of meat-free dishes from all over the world.

You can either go for an à la carte or the popular Hiltl Buffet, where you can choose from over 100 home-made delicacies, freshly squeezed fruit juices and tasty lemonade.

Currently managed by the fourth generation of the Hiltl family, the Hiltl is also an academy, where seminars and courses are held.

It is at Bahnhofstrasse, the shopping mile of Zurich, where you find the highest concentration of luxury brands of the world. Bahnhofstrasse is considered one of the world's most expensive  shopping avenues and so if you are on a tight budget, you can just window shop. 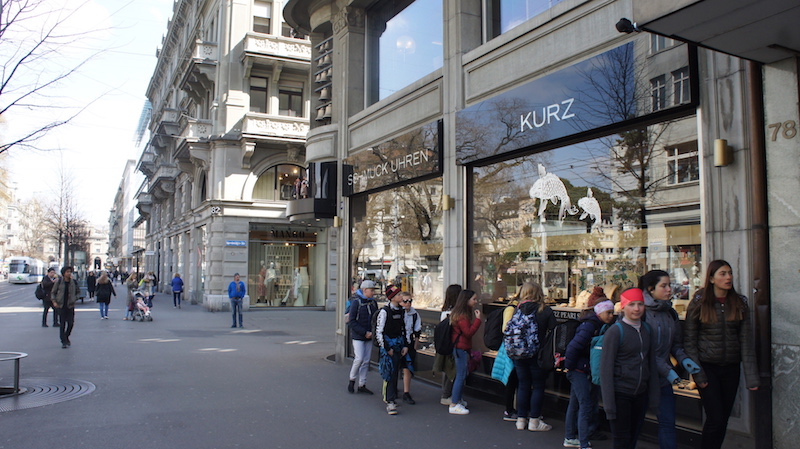 From fashion and art objects to Zurich specialties, you find everything here as this boulevard connecting Lake Zurich with the Main Railway Station on a length of 1.4 km (0.87 miles) attract both local residents and visitors. 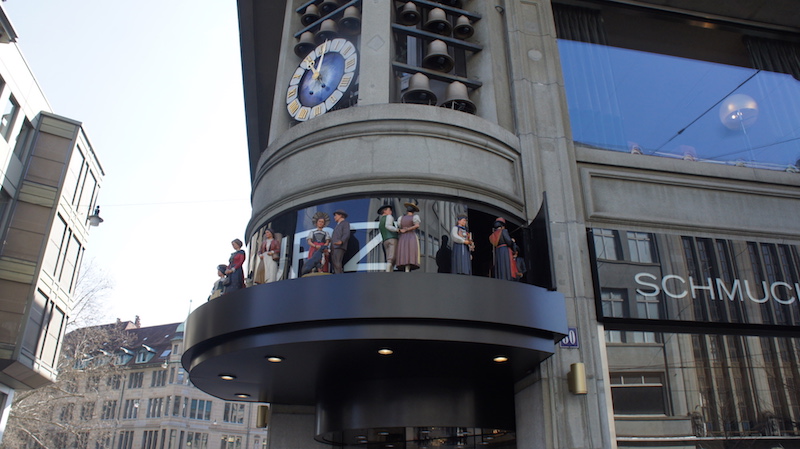 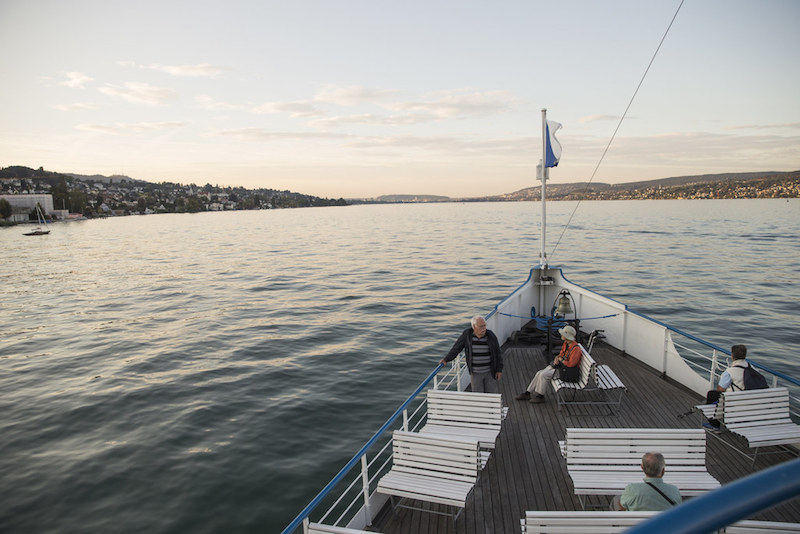 A round trip to Rapperswil is highly recommended.  It's a awesome journey looking at the towns from the water while relaxing with beverages and food.

Rapperswil-Jona, town of roses located on the upper end of Lake Zurich, has a Mediterranean holiday atmosphere. 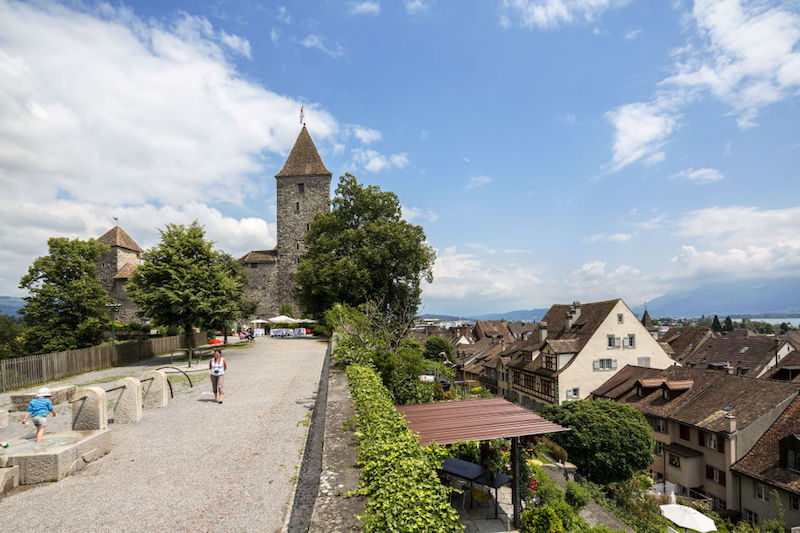 A car-free medieval town, Rapperswil has a castle with a Polish museum.

Wrap up your Zurich day with this picturesque town.

(Images and video by the author and Zurich Tourism)