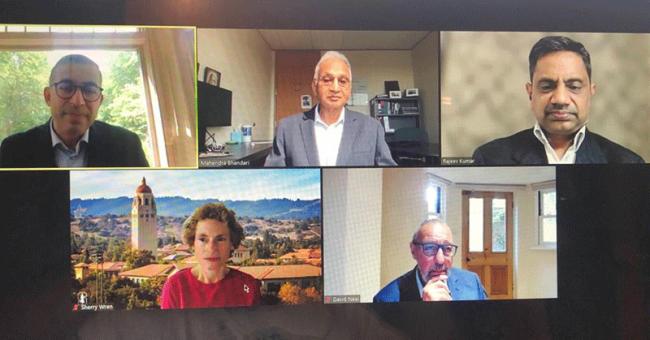 In this innovation Dr Kaouk and his team modified the technique of robotic kidney transplant developed at the Vattikuti Urology Institute and Medanta Medicity.  Kaouk used a da Vinci single port robot for truly minimally invasive surgery.  The early results of patients who had undergone robotic kidney transplant through this technique could go home in only 2 days. This technique transforms this major surgery almost into an outpatient procedure rather than lengthy hospitalization and recovery.

Dr. Nayak innovated a robotic technique to perform very major cancer surgery of the head neck to clear the lymph nodes in the neck with quick patient recovery and minimal discomfort.

This novel technique was used to select right place for attaching the artery of kidney during robotic kidney transplant and avoid atherosclerotic plaques in the blood vessel by application artificial intelligence-based algorithms.

Mr Raj Vattikuti, president of Vattikuti Foundation, entrepreneur, philanthropist said beginning with the first robotic surgery at Henry Ford Health System, Detroit, USA in early 2000s for prostate cancer with the help of Dr Mani Menon, surgeons and fellows from all over the world continue to set new standards.

The pioneering team worked with the robot maker, Intuitive, to cover all body parts for all kinds of cancer. The procedures developed all over the world are making a remarkable difference and impact on the patients, said Mr Vattikuti adding that he was proud to be part of this journey.

Paying a tribute to Late Shri K. Subramanian, “KS”, Vattikuti said, “What KS accomplished is unbelievable as he learned everything, he could about robotic surgery, including knowledge of technology and surgery. He did a remarkable job of spreading this across India. I'm really thankful to KS what he achieved and this global video contest in his memory will keep his legacy alive.”

The innovative prize-winning kidney transplant technique showcased is an improvement, building on the technique developed by the Vattikuti Urology Institute. For most of the major surgeries done in India the surgeons have taken robotic surgery to the next level making it as simple as an outpatient procedure in contrast to an open surgery.

“As surgeons continue to innovate newer procedures in robotic surgery, the Vattikuti Foundation will continue to invest and make it accessible to other surgeons,” said Vattikuti, co-author of 'Digital Leader’ and ‘Digital Simplified’ along with Professor Ram Charan.

The eminent international jury panel made up of Dr David Neal, Professor of Surgical Oncology, Nuffield Department of Surgical Sciences at Oxford University, UK; Dr Sherry M Wren, Vice Chair and Professor of Surgery, Stanford University, USA and Dr Rajeev Kumar, Professor of Urology and Associate Dean, AIIMS, New Delhi announced the top 3 awardees and their submissions were showcased. A short interaction between the awardees and the jury members followed.

Surgeons from about two dozen countries in Africa, Asia, Europe and Americas witnessed

the virtual KS Awards 2022 event by the Vattikuti Foundation over the weekend.

For the 2022 competition that went global for the first time 48 per cent of submissions were from India, 20 per cent from Italy and 10 percent from the United States. The videos that met the submission criteria were seen by over 12,000 viewers.

The video entries were then distributed to a panel of 20 domain experts/robotic surgeons from the United States, Europe, Nepal and India. The next level of voting came from a public crowd-voting poll with 2,000 entries.

Dr Mahendra Bhandari, CEO, Vattikuti Foundation and Director of Research at Vattikuti Urology Institute, Henry Ford Hospital, Detroit, said, “The Vattikuti Foundation is encouraged by the overwhelming response to this contest. He seconded jury member Dr Rajeev Kumar’s view that all entries were worthy of winning.”

Vattikuti Foundation proposes to host a full day academic session entitled “Humans at the cutting edge of robotic surgery” in Miami, USA in mid-November 2022 where highly rated 20 entries will be presented by the authors for a critical review by the experts in the field. The top 3 winners will be handed over the prize money in “Vattikuti Award Ceremony 2022”.