Your Turn
Column
Berlin: No Wall Too High 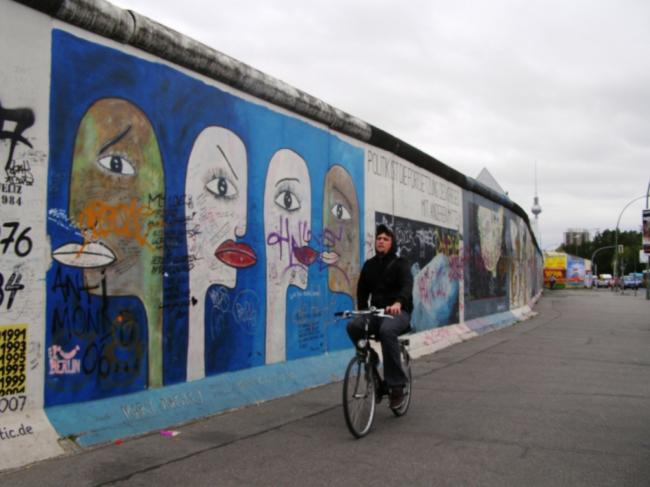 In a peaceful revolution in 1989, the people of two Germany dismantled the Berlin Wall. Sujoy Dhar walks past the remains of the structure that divided a people for decades

"Shortly before coming to see this [the Berlin Wall] I found myself in an apoplectic rage because my American debit card would not work at the ATMs here [erstwhile East Germany]. People died trying to cross this thing. Apparently the other side was nothing but tourists."

-- A flaking spray writing by an unnamed traveller on the graffiti-bombed Berlin Wall at Kreuzberg. Around 1990, two years before his death, India's greatest filmmaker late Satyajit Ray made Shakha Prashakha (Branches of a Tree) capturing among others the anguish of a politically conscious man whose world of faith is seared by the corruption around and the fall of communism far away in eastern Europe. Pratap, the character etched by Ray, struggles to come to terms with the fall of Berlin Wall. It shatters him as much as the painful discovery of the corruption practised by the people he had idolised. I can recall myself in college when the Berlin Wall fell and when I was trying to fathom not too successfully the angst of Pratap in Ray’s one of the most introspective films. On Indian television around that time, a new chapter had begun. Prannoy Roy had happened. He was already hosting his iconic show, The World This Week, a magnet for the likes of me everyFriday night when the ace journalist would wisen the TV viewers with his oeuvre of foreign news capsules. In one episode of 1989 I remember watching footage of the Berlin Wall collapse and the emotional celebrations in Germany. When I went to Berlin for the first time, I chipped off some pieces of the remains of that wall at Kreuzberg and brought them back home. This is the most clichéd thing to do since the fall of the wall and I was no exception.

In Berlin every souvenir shop sells pieces of concrete from the wall that divided a country for over three decades (since it was built in 1961) and came down in the culmination of a dramatic turn of international events and fall of communism. We can all remember 1989 as the Year of the Iconoclast. As a recent special issue of Time magazine listed, the year marked the beginning of a new world order, most significant of the events being the fall of Berlin Wall.

For me, after the heady cocktail of life in Paris, Berlin seemed placid, rather docile. It is easy-paced, sprawling and orderly. At Checkpoint Charlie, I first caught the glimpse of the Berlin Wall. Checkpoint Charlie is the name given by the Western Allies to the famous Berlin Wall crossing point between East Germany and West Germany during the Cold War. This symbol of Cold War which featured in many a spy thriller and books, needless to say, is a foremost tourist attraction. I was not too impressed standing at Checkpoint Charlie or rather wondered what to make out of the disappointment. There was some exhibition going on there along the wall and perhaps these shows go on the year through. The Wall was a must-see for me in Berlin but at Checkpoint Charlie I couldn’t find enough length of concrete to even take meaningful pictures and show my folks back home. Then one day, as I was heading for Hamburg and was on my way to a major terminal station (Ostbahnhof) of the city near Kreuzberg, I saw a part-dismantled wall beginning abruptly. As I drew closer, the Berlin Wall exploded before my eyes in a burst of abstract expressions- spray painted graffiti, pop art and thoughtful, often wisecracking, observations like the one I quoted at the start. It is an open air exhibition of paintings that stretches for over 1.2 km. I later found out that this part of the wall in Friedrichshain-Kreuzberg is famously known as The East Side Gallery where the painters have documented the winds of change and freedom that greeted a whole nation after the wall’s collapse. It is said to be the largest and everlasting open air gallery in the world where the first painting was started by Christine Mac Lean in December 1989 immediately after the fall of the Wall.

Famous artists like Thierry Noir and Keith Haring found a limitless canvas on the Berlin Wall. Besides the famous names, many unknown artists too painted on the Wall turning it into a rich tapestry of free artistic expressions.

The ‘Wall-Art’ was not prohibited and so everybody who wished could paint. While the painting started first on the western side, after the fall of the Wall, the white and grey eastern side became the free canvas of the artists. 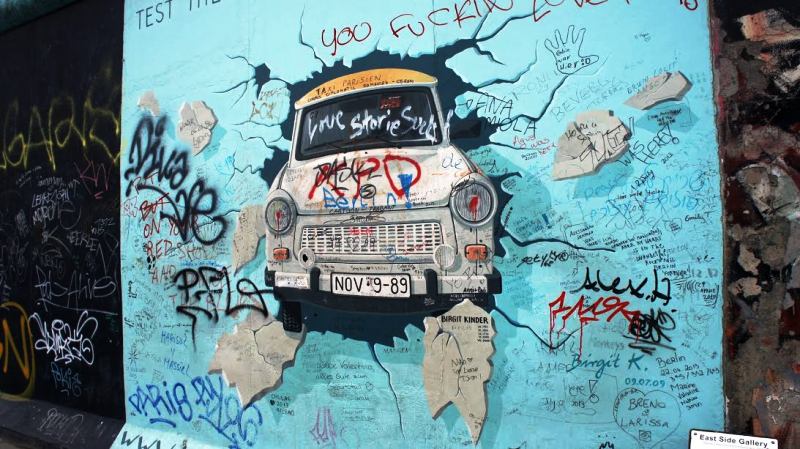 The Wall across Ostbahnhof is the place where the tourists should head to get the best of the wall art and graffiti. The collapse of the Wall has inspired countless films made since 1989. As I walked past romancing it and taking pictures, I remembered watching in the Kolkata Film Festival Goodbye Lenin, a German film revolving round a family where the children of elderly lady Christiane, an ardent supporter of the then ruling Socialist Unity Party of East Germany, try to fake a communist Germany before their mother after she wakes up from a coma and near-fatal heart attack just before the fall of the Wall.

Afraid that the shock of the event would kill her, son Alex sets out to maintain the illusion before his mother that things have remained the same. Actually much like the film, things were never the way in the GDR as it had been conceived by half the world besotted to the ideals of communism. The Wall had dammed the free spirit of the East Germans who wanted to break free of their bleak life. Many died trying to cross the Wall at places like Checkpoint Charlie to reach the other side. So when the Wall fell, an avalanche of emotions swept people from both the sides.

Recalls British journalist Anne Mcelvoy in her article, “It Happened One Night” in a special issue of Time commemorating the events of 1989: “After dark, Germans poured through the wall, the first still in their nightclothes, sleepwalkers into history. Ten thousand of them partied and hammered, or simply looked around dazed at the strange new world without the Thousand-Year Wall.

“The next night, the bulldozers began to move in and the opening became official. I watched it happen in the Bornholmer Strasse, a checkpoint in a suburb near my flat. It had the feel of a neighborhood party, with housebound grandmothers shouting down from the tenements, "Bring me a piece of the Wall up, son!" as if calling for an apfelstrudel (apple strudel), and separated families meeting again.” A year after the Wall was built, in 1962 the same magazine had written: “Seldom in history have blocks and mortar been so malevolently employed or so richly hated in return. One year old this month, the Wall of Shame, as it is often called, cleaves Berlin's war-scarred face like an unhealed wound; its hideousness offends the eye as its inhumanity hurts the heart.

“For 27 miles it coils through the city, amputating proud squares and busy thoroughfares, marching insolently across graveyards and gardens, dividing families and friends, transforming whole street-fronts into bricked-up blankness. ‘The Wall,’ muses a Berlin policeman, ‘is not just sad. It is not just ridiculous. It is schizophrenic.’”

Picturing myself against the wall, I was elated. Yes, like a true global tourist I had “been there, done that”. But the excitement of a tourist notwithstanding in my mind I paid a silent tribute to the Germans who faced it all. I am sure the protagonists of films like Ray’s Sakha Prasakha or Goodbye Lenin, have moved on since 1989. But then there is one lesson for the world to remember: “Those who forget history are condemned to repeat.” Wall of Shame On a Sunday morning August 13, 1961 construction began on The Berlin Wall by the former GDR (German Democratic Republic) to prevent the East Berliners from escaping the Soviet-controlled East German state into the West of the city, which was then occupied by the Americans, British and French. Berlin was a city controlled half by the Western forces, in the middle of the Soviet Occupation Zone of Germany.

By 1961 an estimated 1,500 people a day were fleeing to the West lured by its capitalist economy. So overnight in 1961 the streets of Berlin were torn up and West of Berlin was completely sealed off from the East.

The version of the Wall that started life in 1961, was in fact not a wall but a 96 miles barbed wire fence. However, it proved too easy to scale and so work started in 1962 on a second fence, parallel to the first but up to 100 yards further in. 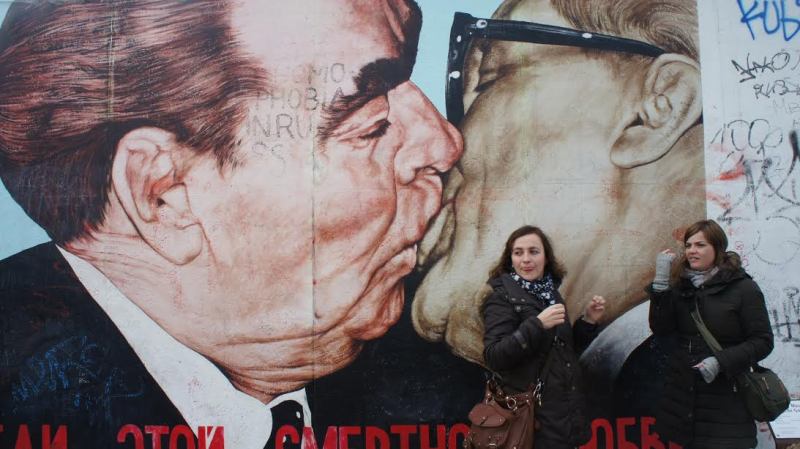