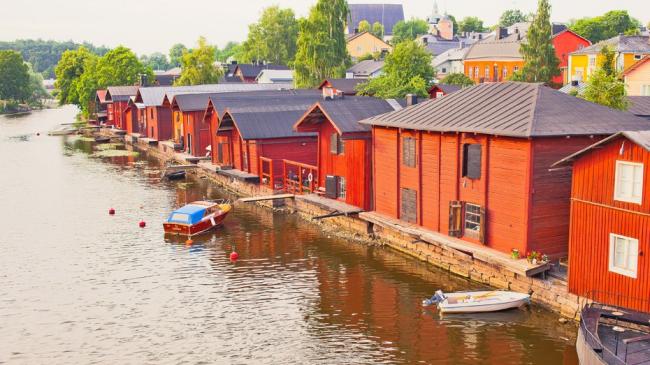 Located about 50 kilometres east from Helsinki, it is possible to travel from the capital to Porvoo by by steamboat in the summer. Even though Porvoo is not exactly a coastal town, it is connected to the Gulf of Finland via the Porvoo River.

The river flows through the city, passing Porvoo’s most well-known landmarks: its red shore houses. Originally, the shore houses were painted red in honour of the arrival of Gustav III, the king of Sweden.

Historically, Porvoo has been an important centre of trade and the shore houses were once used to store goods and produce, such as exotic delicacies from distant lands.

OLD PORVOO IS ONE GREAT MUSEUM

Built in the 18th century, the residential area of Old Porvoo is an idyllic and picturesque district perched on a hill by Porvoonjoki. The houses have been built according to medieval zoning and, in terms of architectural history, they are extremely important. Old Porvoo is home to many lovely restaurants, cafés, shops and museums.

CATHEDRAL WITH AN EVENTFUL HISTORY

Porvoo Cathedral, located at the heart of Old Porvoo, is one of the city’s most well-known buildings. Built at the turn of the 14th century, the cathedral’s remarkable history has seen it burn down five times, most recently in an arson attack in 2006. Following the devastation, the cathedral was renovated for two years, finally reopening to the public in 2008.

FAMOUS FOR ITS TASTE AND STYLE

When it comes to delicacies and home décor, Porvoo is definitely one of the best destinations in southern Finland. Already by the 19th century, people travelled from as far as Helsinki to visit the city’s cafés and restaurants. The city’s intimate interior design shops are famous throughout the entire country, with styles varying from antique and romantic to modern and state-of-the-art.