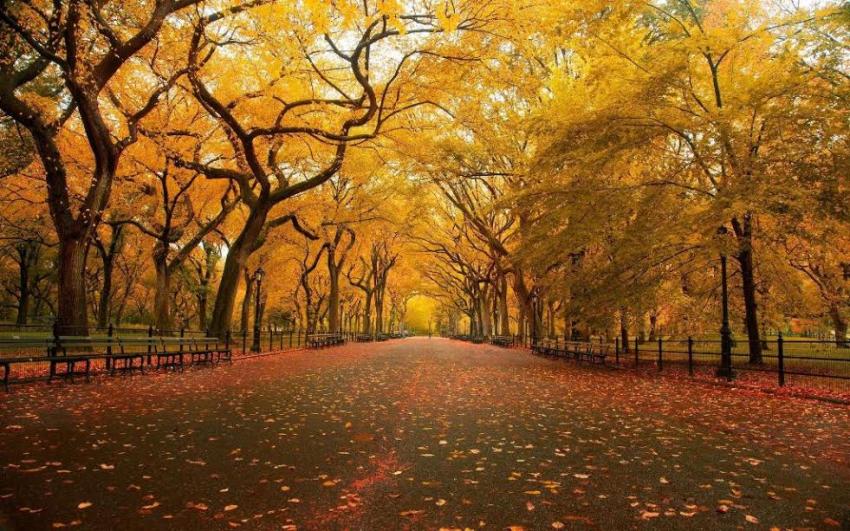 The parades and annual events of Manhattan are full of action and energizing. The city also has another aspect that is calm and relaxing. They are the parks and garden of Manhattan.

The Central Park is a treasure trove of surprises. The river side parks along the East and Hudson Rivers, the Roosevelt Islands are beautiful, packed with activities. There are no lines, queues and most of them are free.

The Central Park in Manhattan, under the Central Park Conservancy is a piece of paradise, nestled in the heart of the city. It is America’s first public park and the most visited. There are many attractions in the park like the Belvedere Castle, Turtle Pond, Central Park Zoo, Conservatory Waters, Shakespeare Gardens, Seneca Village, Harlem Meer, North Woods, Ramble of the Wild Garden, Hallett Nature Sanctuary and many more scenic landscapes and beautiful sculptures.

I did not always visit these places, just leisurely walked around or basked in the sun on Great Lawn or sat on the benches. Most of the park benches are dedicated in the memory of someone, someone who like me had a love affair with Central Park. I would just sit and enjoy nature’s bounty, be the fall foliage or the spring blossoms, enjoying my cup of morning coffee.

During each and every visit to the central park I have made acquaintance, if not befriended people from far flung nations. The days I was lucky I would spot a Hollywood or Soap Opera star. I have lived and worked in many cities of India but never got a glimpse of any Bollywood star. In Central Park I have seen many Hollywood stars and a few of our own Bollywood celebrities like Preity Zinta and Rani Mukherjee. 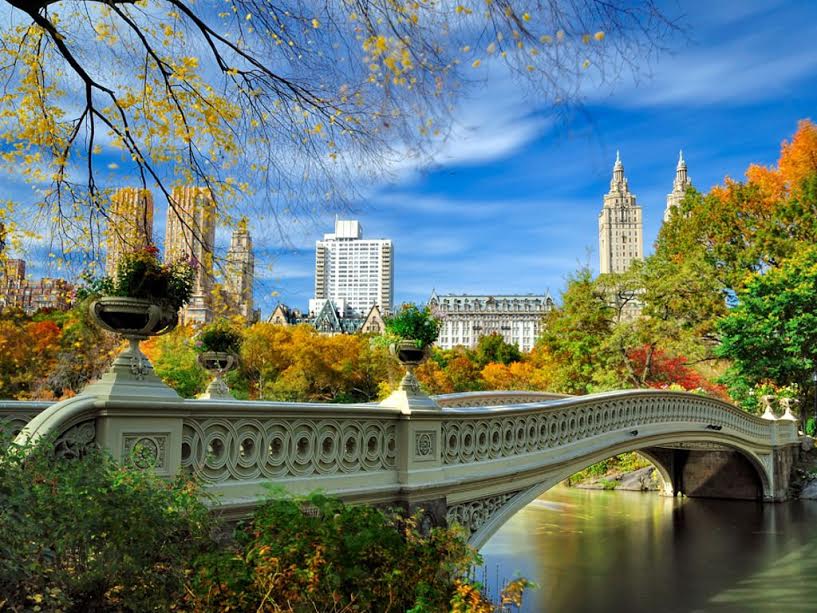 The Conservatory Waters is located between East 72nd and 75th Street. This is like the model boat pond of Paris, France. This spot is popular with families and bird watchers. The boat race in the 1999 movie Stuart Little was set here. My family has rented model boats from the curbs memorial boat house and raced it in the waters every summer. In the winter months the water is lowered and pond is converted to an ice skating ring, open to the public free of cost. The site is famous for the open café, Alice in Wonderland sculptures, Hans Christen Anderson statues, where story telling programs are held. The pond is also home to the most intelligent ducks. They know exactly how to dodge the motor boats and yet do not miss a single crumb of bread being fed by curious toddlers. The real competition is between the furry tale squirrels and the ducks who race to the visitors for their share of the feed. It is such a funny site to watch these busy squirrels pick up the bread, race back up the tree to the nest and scurry back for a second round even before the duck have finished its first helping of bread. A few blocks to the north I am greeted by more animals.

The Central Park Zoo is Manhattan’s own little zoo. It is small enough for a complete tour yet big enough that a visitor can spent an entire day there. The Tisch Children’s Zoo, the 4D Theater and George Delacorte Musical Clock are the other attractions of the zoo. The petting zoo is a must for the young members of the family. It houses domestic animals and for a quarter (25 cents) munchkins can feed these animals right out of their hands. Next to each pen is a bronze sculpture of the animal and when little hands touch the statue, it gives out a moo, oink or a bleat…

The Delacorte Musical Clock is a hot spot for visitors. People crowd in front of the brick archway at the entrance of the zoo looking heaven ward for the clock to strike. There are bronze sculptures from Frederick G. R. Roth “Honey Bear and Dancing Goat”, one of the 44 tunes play while these bronze animal sculptures move around the base of the clock. Every hour two monkeys on top of the clock strike a bell. This is outside the zoo, so everyone is able to watch the routine. This is very similar to the famous clock with old man in the Salar Jung Museum in Hyderabad, India.

The zoo itself house sea lions, polar bears, penguins, Himalayan snow leopards, exotic birds and more. The animals have traveled from tropical, temperate and polar zones of the world to be here at the zoo. The sea lions perform simple tricks for their meals. The snow leopard walks up close to the viewing gallery to visit greeters. It is a delight to watch the snow leopard spring and leap around in his rocky home. The penguin enclosures are the busiest. My favorite are the polar bears enjoying a cool shower under the fountains.

The aviary draws a large group of visitors with chirps, tweets and squawks. The bird house is a complete habitat with trees and waterfall. These colorful birds actively fly around here and it is such a happy place to watch these birds with colorful crowns, plumes and tails. Some even perch on the shoulders, backpack and hats of visitors and might slip out of the bird house unnoticed to take a tour of the zoo themselves. After feeding the birds and animals, the visitors stop by for a quick bite or sip at the Dancing Crane Café. 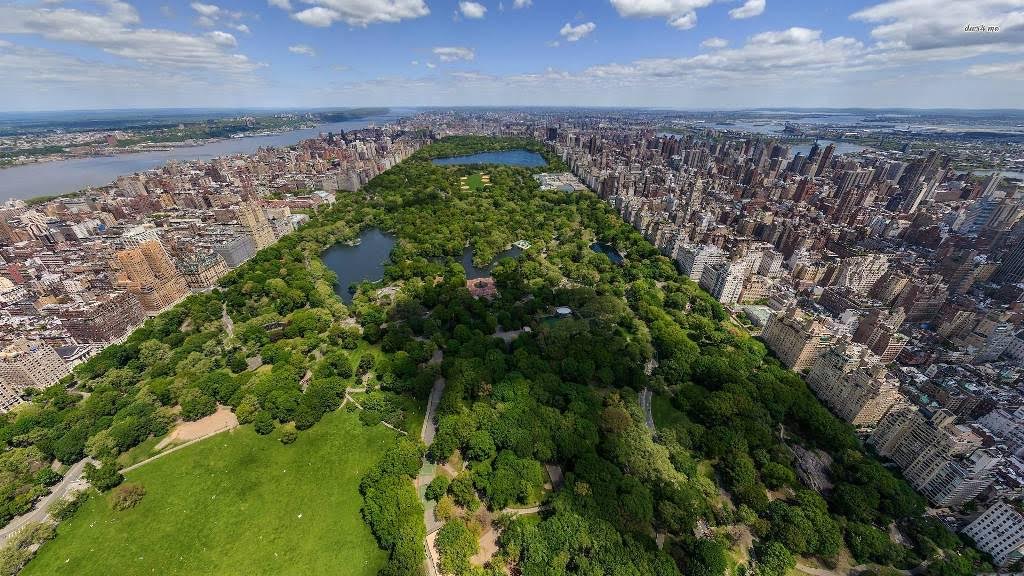 My next stop is mid-park at the Carousel. This is a fine example of American folk art with 57 vintage wooden horses playing to sweet music. In the 1800s, live horses powered the rides, who were trained to start and stop when the operator tapped on the wooden platform. Each wooden horse is beautifully painted and tell the story of thousands of little hands that have hugged their painted mane and giggled with happiness. Children ride, and adults with a child’s heart ride this too. Adult New Yorkers who rode this as a child themselves come back here accompanied with their own little ones. This place is one to make beautiful memories.

My last stop in the park are the Conservatory Gardens. This is a quiet zone and favorite spot for artists and weddings. The six acre formal garden has been divided into three smaller English, French and Italian gardens. The chief attractions are the Vanderbilt Gate, the Three Dancing Maidens fountain and the Water Lily pool. During spring, the garden displays tulips, Korean Chrysanthemums, blooming crab apple trees and more. A leisurely stroll through the garden with its calm and serene beauty is splendid and breathtaking.

A few of my other favorite things to do at central park are watching the Shakespearean plays on summer evenings and watching the world go by a Columbus Circle which is not as hectic as Times Square but a forerunner where beauty meets history.

Central park is the king of parks, but one cannot overlook the other parks along the East and Hudson River.

On the west side, the Riverside Park runs along the river Hudson. In the south the park extends and leads to Hudson River Park and then to Battery Park which extends to the southern tip of the island. In the north the park has paths that join it to Fort Washington Park. That makes it possible for park goers to bike or walk nearly the entire length of Manhattan along the river Hudson.

Riverside Park is my favorite with the 79th street boat basin, the esplanade under which the Amtrak railway lines run, has several piers, dog runs, outdoor cafes, promenades, tennis courts, and angling clubs.

There are free kayaking lessons during spring and summer which attract both beginners and experts. Bikers rent a Citi bike from one of the many kiosks found across the city. During winter skating, tobogganing, and sledding are fun ways to hit the neighborhood slopes instead of flying to Vermont. I always got a free mug of hot cocoa after all the fun in the snow.

The esplanade has a spectacular view of the marina, the boats, the shimmering waters and beautiful banks of New Jersey at a distance. This is the only boat basin that allows vessels to dock all year round for a fee. There has been celebrities like Frank Sinatra docking their vessels here. Poet Edgar Allen Poe too enjoyed sitting on “Mount Tom” at 83rd street.

This area is part of the historical district and is dotted with monuments like the Grants Tomb, Eleanor Roosevelt Monument, Joan of Arc statue and Soldiers’ And Sailors’ monument.

Donald Trump built the extension of the River Side Park south which include Trump buildings, piers, water fronts and plazas, from 72nd to 59th street. On beautiful moon lit evenings this is such a romantic spot to walk with that special someone with cool breeze blowing in from the river and shiny halogen lights from the west side highway lighting your path. As one walks on the green pastures with plum brown geese crisscrossing the path and their occasional honks break the silence.

Along the east river is the Carl Schurz Park where Gracie Mansion, the official residence of the mayor of the city is situated. Gracie Mansion is open for tours for the public. Also on the east side is the aerial tramway from Manhattan to Roosevelt Island which was the setting for the climax of the popular Spider Man movie. This tramway is one of three in America. The new and renovated tramway opened to the public in 2010. The tram gives the riders a bird’s eye view of the Upper East Side and Midtown East. The tramway runs parallel to the historical Queens Borough Bridge. Late in the evening the view from the ride is spectacular with Manhattan skyline lit up and glittering lights on the bridge looks like rows of lamps on Diwali night.

The Roosevelt Island is small strip of land between Manhattan and Queens. It is a secret haven only a ride sway from the madness of the city. One can take refuge in the lap of nature with green meadows, gurgling of the river, winding paths, rows of coniferous trees carpeting the land with pine cones and acorns. Large white seagulls circle overhead flying gracefully as if they were performing a ballet recital for the humans. The northern tip of the island has a light house. This is the best picnic spot on the world. I would hop on the tram way which runs almost 24 hours with the metro card (subway ticket) and head to the meadow by the light house and lie on the grass, enjoy the beauty of nature and watch the clouds pass by.

Whether I was living in New York or just visiting life in Manhattan is like an adventurous field trip. The first experience of the city made blood gush to my brains but once the initial fever subsided, I became a part of the little island. Adventure called Manhattan never ceases or even slows down. It is teeming with the best of minds, warm hearts, friendly faces who work hard every single day to make Manhattan new, novel, and fresh. Manhattanites are bursting with ideas, always experimenting and try to make ‘the Manhattan experience’ better, bigger and wholesome. Manhattan offers equal fun and entertainment whether the visitor is on a shoe string budget or has a platinum credit card with no limit. The visitor has to take the path less treaded and she will have the best experience ever.